Some things take time. Or someone here isn't doing their part. But I have no idea who that certain someone might be. 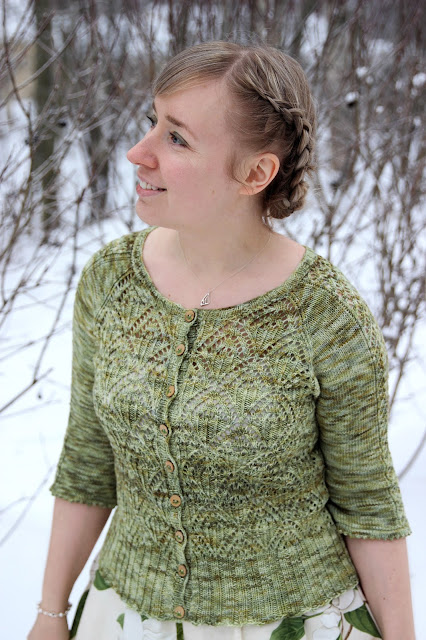 Let's start at the beginning. I'm pretty sure it was back in 2013 when I fell head over heels in love with a lace cardigan design. At least that's the year it was added to Ravelry's data base. Unfortunately it was part of a book and I didn't want to buy the entire book just for this one pattern. 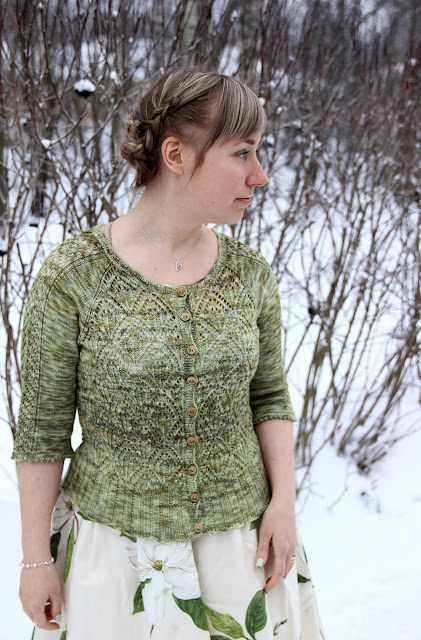 But no worries! In 2014 a friend told me she found the pattern in a knitting magazine and was just making one for herself. Once she finished it, she sent the magazine to me along with some super cute stickers - thanks dear! (2014 - never forget!)

So it seems logical that already in 2017 I managed to cast on, doesn't it? I'm fast that way. 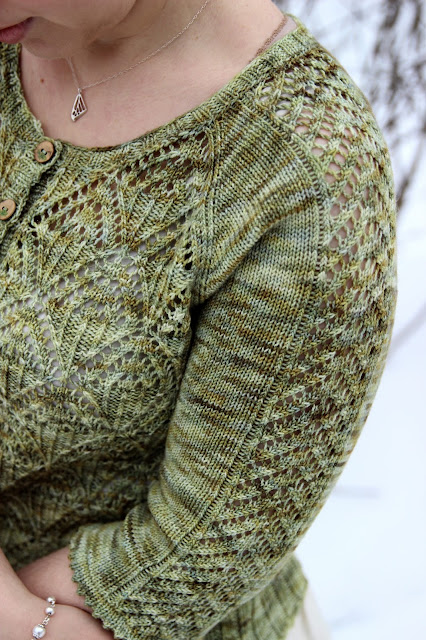 So I had a pattern I had been hoarding for years. Now I needed yarn. In autumn, I got a lovely present from Snail Yarn's Valentina. She wanted to thank me for using her yarn in my Utu cardigan which made the cover of Laine Magazine. One of the yarns she sent me was this lovely fingering weight Merino Twist in the colorway Pistachio. I love the mix of the light minty green with darker bits turning brown. I decided it was about time to cast on for the lace cardigan as three skeins of this yammy yarn would be enough. 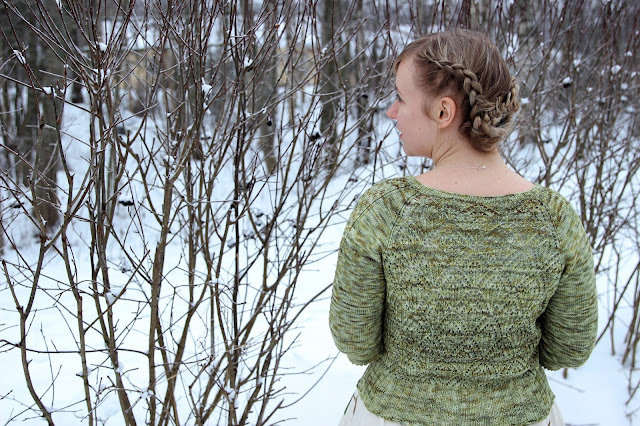 The cardigan is worked top down seamlessly. It has this gorgeous cathedral lace in the back and the front, and a simpler lace that goes down the sleeves and the sides. Actually, I had waited so long to cast on the cardi that I totally forgot, I was planning to omit the lace in the sleeves. It would have made for a bit calmer overall look but now it's too late. Oh well, it looks lovely this way too. 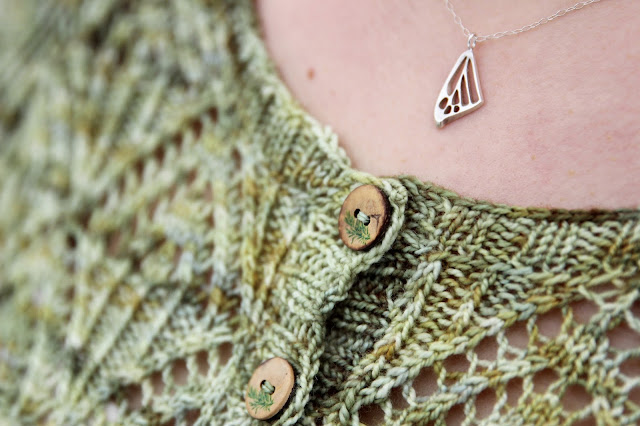 The cathedral lace looks amazing but it took a good while to learn. I don't think I quite remembered it at any point. Also, in the beginning, the raglan increases were incorporated into the lace so you had to keep an eye on the chart all the time. 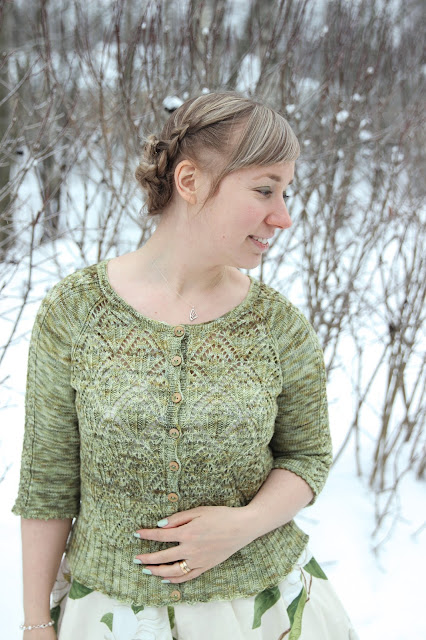 The cardigan is quite short so it'll be something to wear with skirts. The pattern didn't have any waist shaping. Instead, a bit of the lace was knitted with smaller needles just before the ribbing - I guess to make the lace narrow down a bit before the rib which will pull together anyway.

The sleeves on the cardi were more than a bit weird. They were wide enough after the raglan increases and there would still be 13+14 sts cast on at the underarm. I have thick arms but these are way too big for me. Sure, the sleeve decreases were started immediately but there's still an extra bulk of fabric at the underarms. 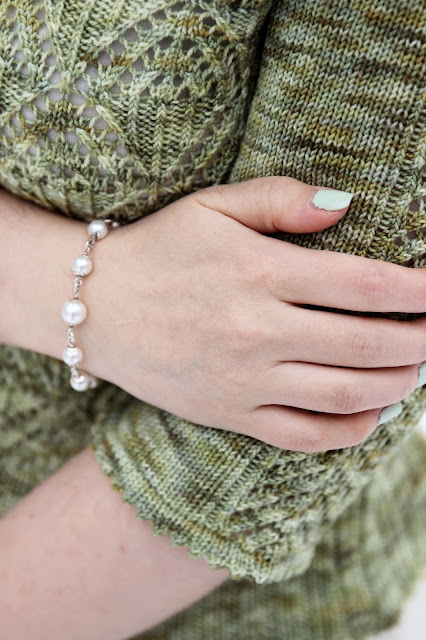 The pattern had cuffs that were turned and fastened on the wrong side. I thought more is more and added a picot row to the turn. I just worked a row of (k2tog, yo). I hate sewing once I'm done with knitting so I thought I could fasten the cuffs with a three needles bind off. It was a mistake as now the cuffs keep turning inside out. Luckily blocking helped somewhat. 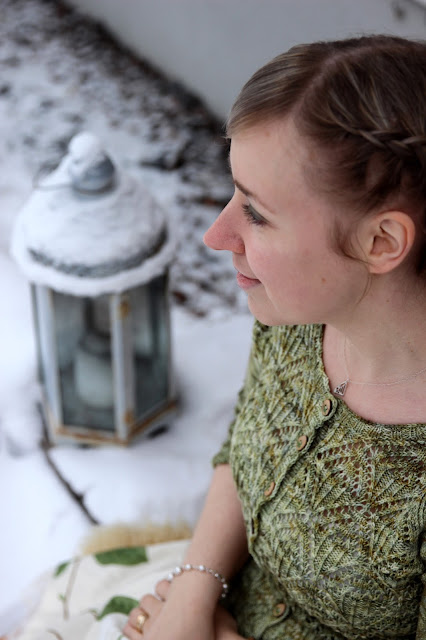 All in all, the cardigan is really cute and I love the yarn color. And yes, I do knit manically all the time so I know I'm not lazy. It's just that sometimes I can't seem to get it out of myself to do something I've been planning for years. It baffles me. Now that the cardigan iis done, I'll give the magazine to another friend who wants to make it. Let's see how long it takes her.
Posted by Neulisti at 2:49 PM 5 comments:

The theme of this Christmas was knits for kids. And I don't even have any of my own. This sweater was a gift for my goddaughter. 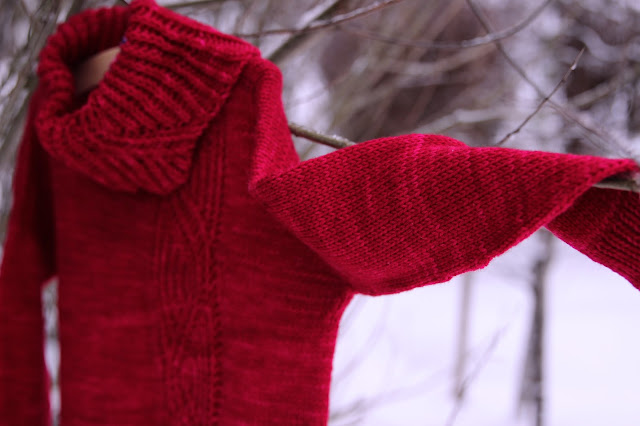 First, there was the Indie gift-a-long discount and I browsed throught hundreds of patterns. Once I came across this one, I had to cast on right away. Then, there was the yarn. I originally was thinking of something less expensive but once I remembered that I've never tried the DK weight Hedgehog, the thought wouldn't leave me alone. And the yarn is good for machine wash as well. So that was that. 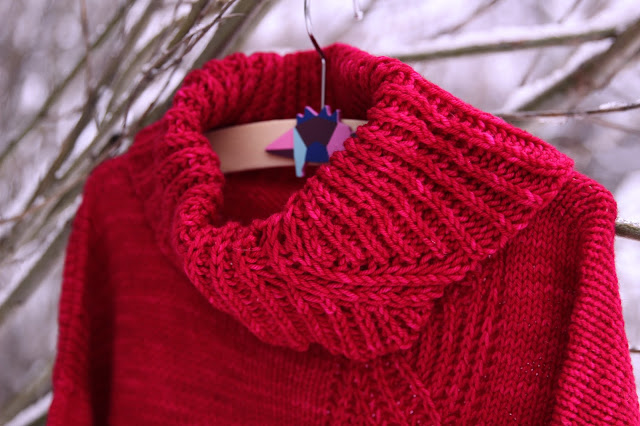 This pattern is a nice combination of stockinette stitch and brioche. The sweater is worked top down, starting a the turtle neck. The cowl is all brioche with a chart at the front. The chart is just increases and decreases but look like cables. 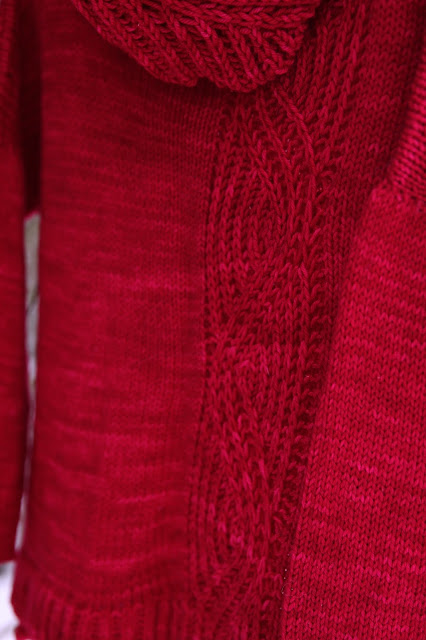 Once the cowl is finished, the rest of the sweater is worked in stockinette stitch with only the chart worked in brioche. The shoulders were shaped with short rows. 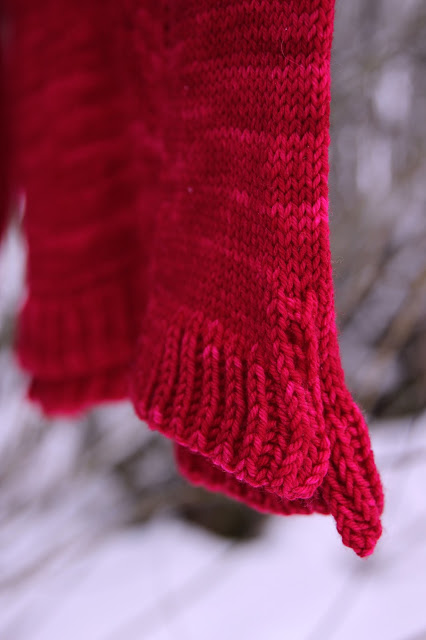 The hem had a slit and the back was worked a bit longer than the front. The hem was worked in brioche and had an Italian bind off. It was a bit laborous but well worth the trouble. 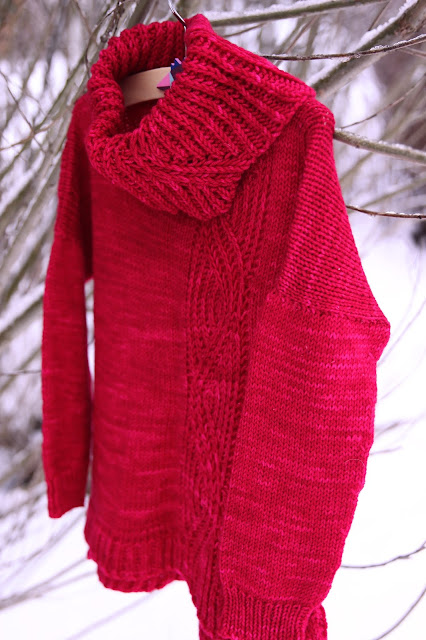 I love the design and it made me want to cast on another brioche project right away - this time in adult size. 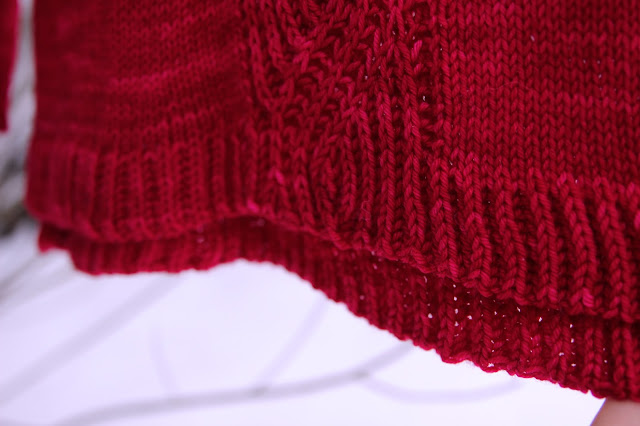 The cast on was also worked in Italian style. The pattern had written instructions for but I don't know if there was an error or if I just could work it right. I managed to cross my purls and knits but thought that nobody would notice so I didn't go back to fix it. 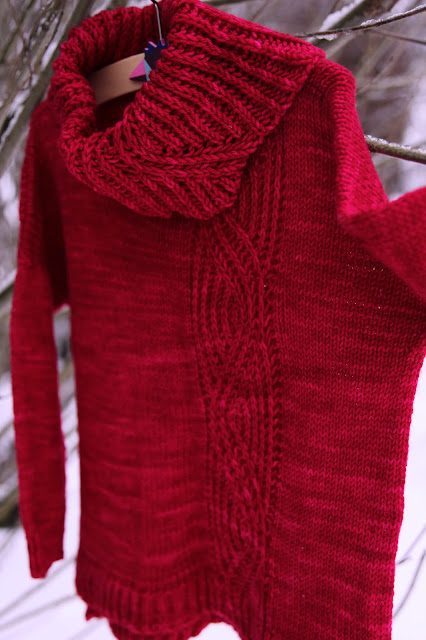 All in all, this was a really nice project and I finished it quickly. I loved the yarn, it was so soft. If only I could capture the pinkish red in the pics. Oh, and the title! I don't know the story behind the name of the pattern but in Finnish, torvi means a trumpet.
Posted by Neulisti at 6:11 PM No comments:

As a knitter, there isn't anything better than having a totally crazy friend who dyes yarn. You know, the kind who's not afraid to try anything you ask her to dye. We were talking and thinking what paintings would fit a sock blank nicely. I said, I'd love to have a sock blank with the Last supper to make socks for my dad who's a priest. I never thought, she would actually paint it for me but se did! 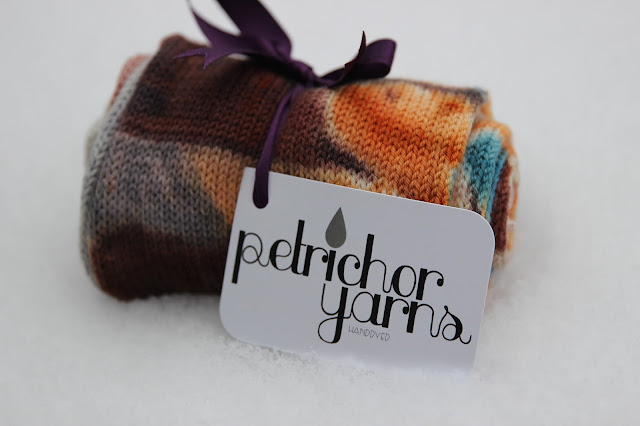 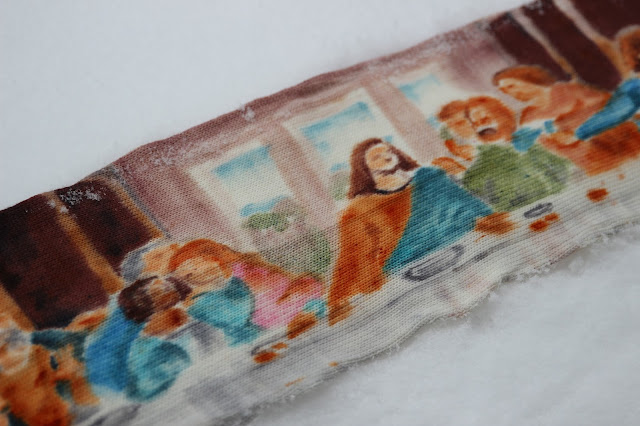 Happiness is a friend with a set of acid dyes and artistic eye. <3 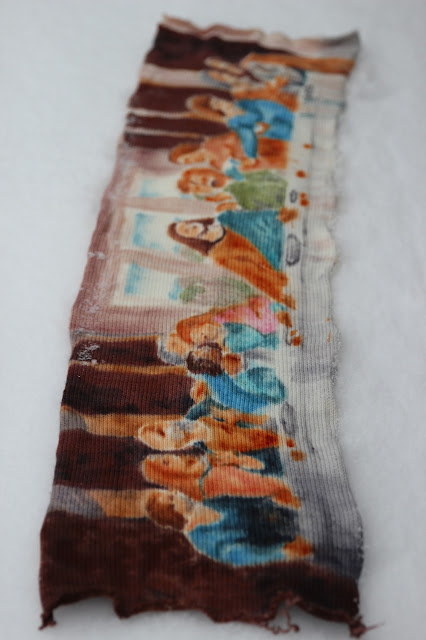 If the yarn artist was a bit crazy, I've heard a few times that I must be out of my mind to unravel this piece of art. But hey, that's the whole point of a sock blank - to make socks from it. 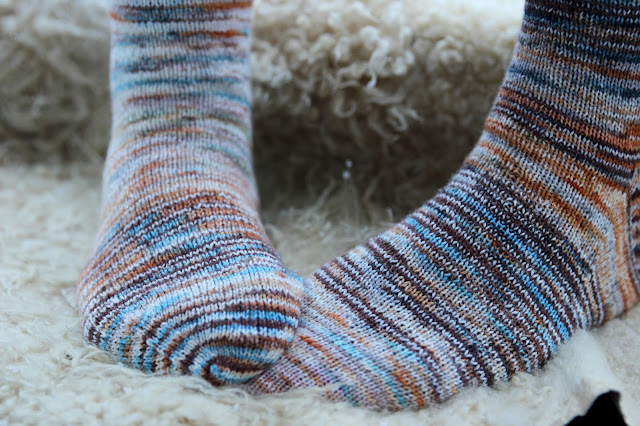 I truly did knit socks from the sock blank. And, this time I was smart enough to write down all the important info instead of having to calculate it all from the first sock. 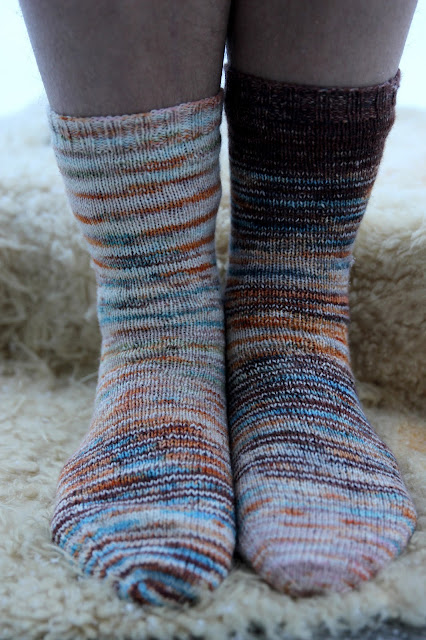 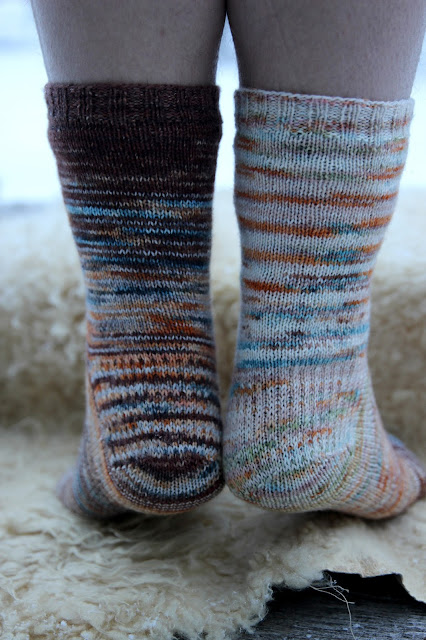 Working with sock blanks is such a blast. I love seeing how the colors and patterns change as the blank turns into socks. This time it was even more fun, watching as yet another disicple had disappeared from the blank as to socks grew. 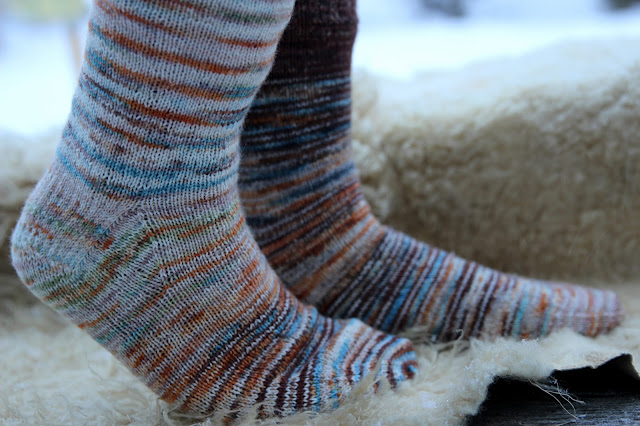 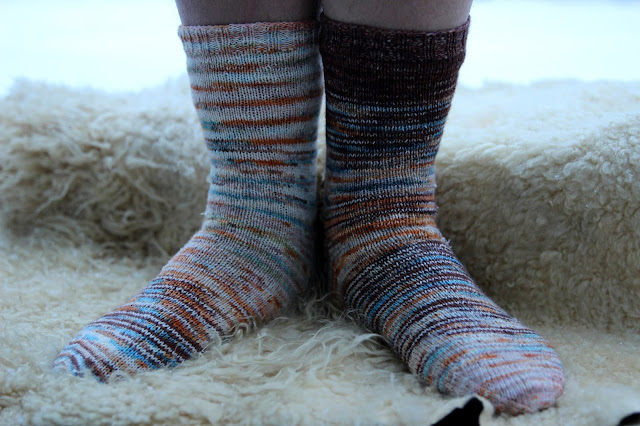 My knitterly friends were eager to watch the socks progress. Someone actually found a drunk cat from the sock blank if you looked at it from a certain angle. What has been seen cannot be unseen. Some were expecting Jesus to apper on the sole of the socks but He made these fun tiger stripes on the leg of the second sock. 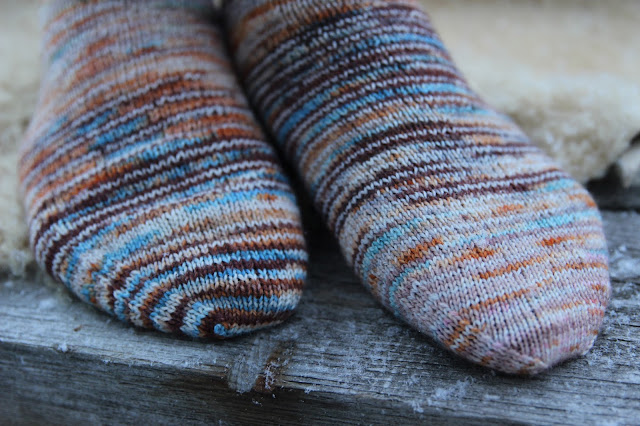 What a pair these are. The colors worked such that you can only tell them to belong together from the toes of the second sock. But I guess that's the appeal of sock blanks - you can never know how the socks will turn out.
Posted by Neulisti at 5:57 PM 2 comments: