Since I had good momentum going, I knitted a second pair for THE box. 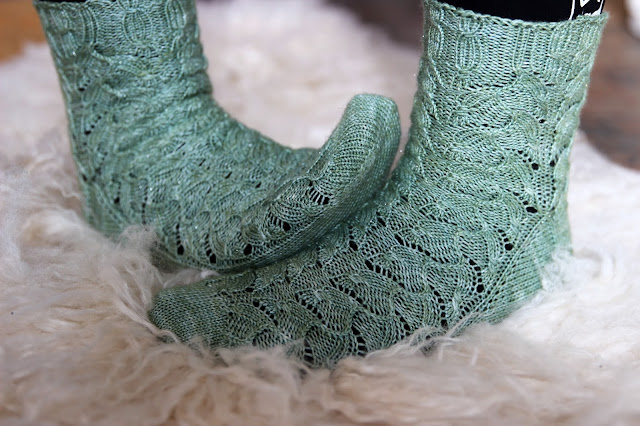 Unlike last time, now I chose the perfect pattern and the perfect yarn. I went stash diving again and selected this special colorway by Ikke Yarns that was only available for purchase at a knitting retreat a few years back. At the time, I had a no-yarn-shopping policy in place so my dear friend, Susanna , bought the yarn and I bought it from her once my yarn shopping ban was lifted. You might say, the ban didn't really work - but who cares? 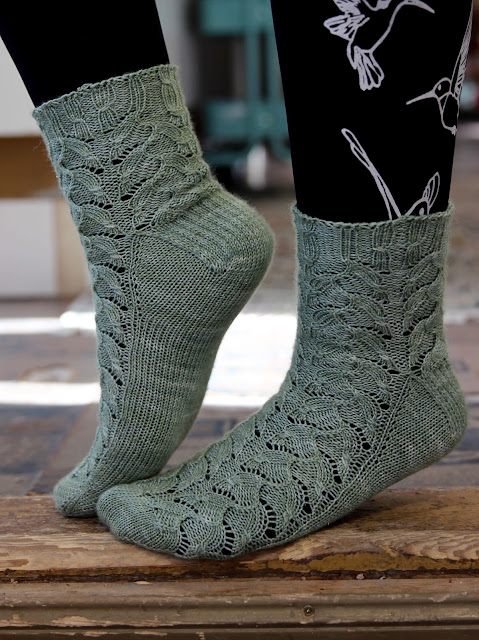 It is almost outrageous that I haven't had the time to knit any of Susanna's designs yet. It was about time! I chose her Emmer Wheat Socks that have a lovely combination of lace and cables. 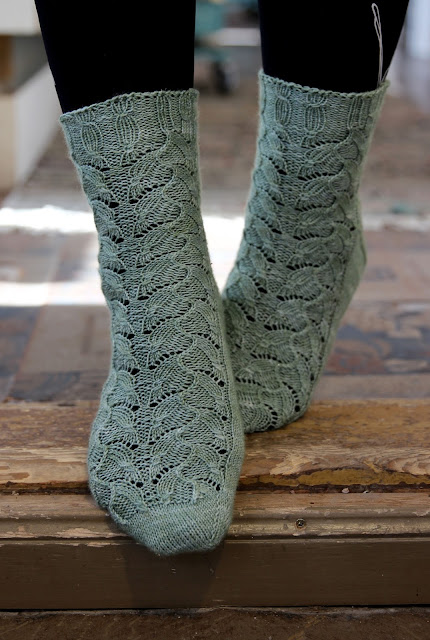 The socks are worker toe up and after the heel, the stitch pattern is worked at the back of the socks as well. The heel was new for me, a kind of a French heel toe up. I prefer knitting socks toe up but I can never remember how to make the heel in that direction. When knitting cuff down, I often don't even read the heel instructions but just work my favorite heel, the French one. 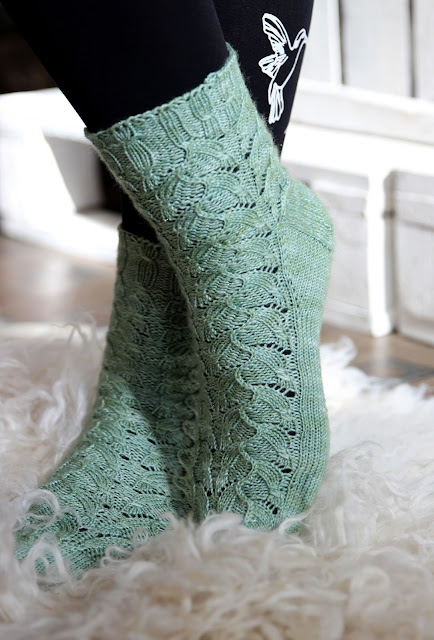 The stitch pattern in these socks is gorgeous. In the middle there is this winding vine and on the sides two stitch cables to give rhythm to the pattern. It took me a while to memorize the chart but after that I didn't have to think about anything except the heels. 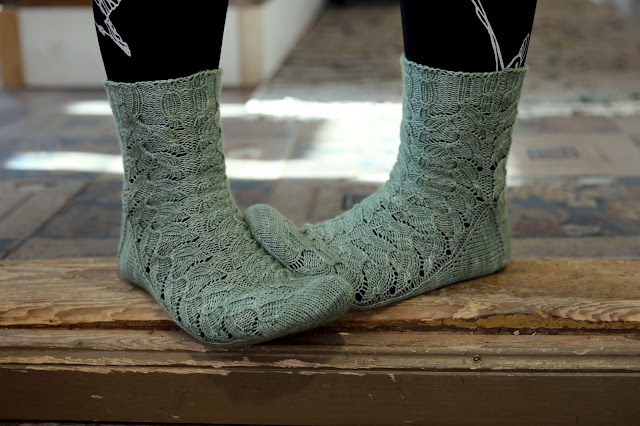 In fact, I stopped thinking to the point that I started the heel and the cuff ribbing on the wrong row of the chart. Luckily, it didn't really matter as the cuff chart could easily be modified to fit the row I was on. 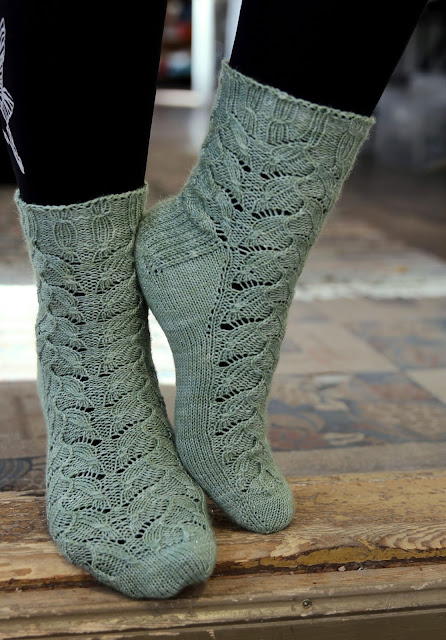 Now, let's get back to the yarn! So, a few years ago, I was at Ikke's knitting retreat and despite of my no-shopping policy, I had to have this special yarn. The warm, yet icy mint green color is a pain to try and catch in a photo but it seemed as if Ikke had dyed it especially with me on her mind. 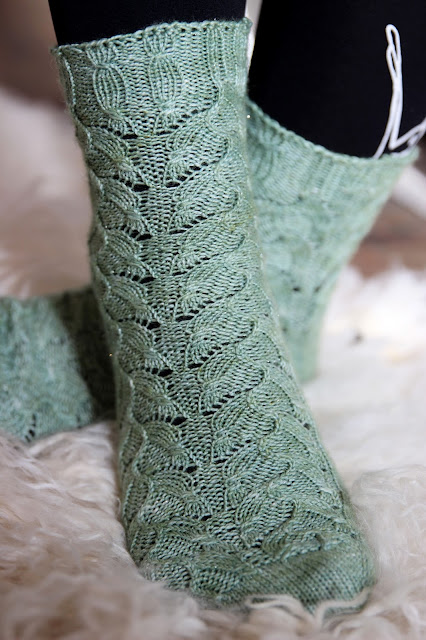 To top it off, the yarn has my favorite twist. It's light and springy, making the socks fitted but not too thight. Also, a little bling never hurt any sock yarn. I especially love how subtle the silver bling in this yarn is - even the pics give you only a hint of bling somewhere in there. If anyone has a trick up their sleeve for capturing bling in photos, please let me know! 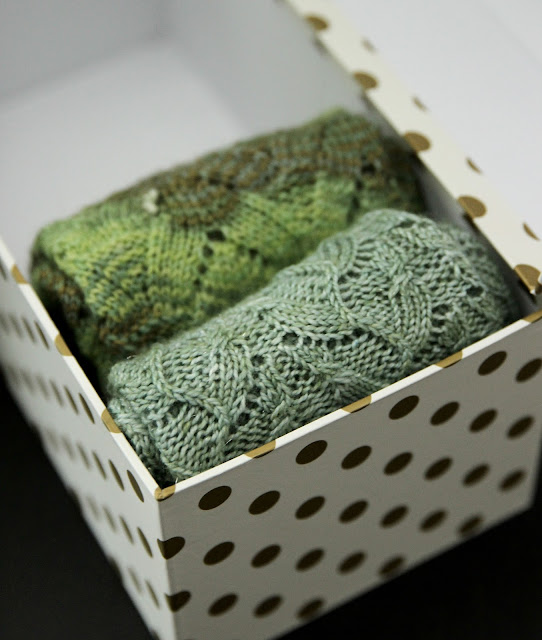 So then there were two. I have the next yarn and pattern already waiting in line.
Posted by Neulisti at 12:17 PM 2 comments: 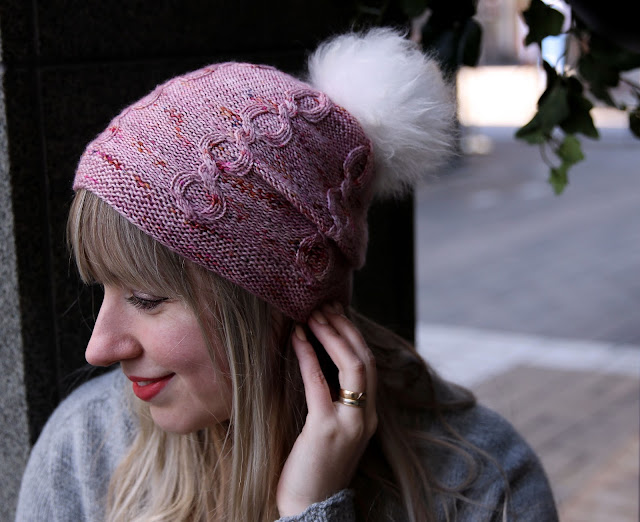 Last year at the Jyväskylä summer knit festival, I bought a skein of this beautiful, fluffy pink yarn. It was one of those "Oh, I have no idea what I'm going to make but I need this delicious skein" purchases. 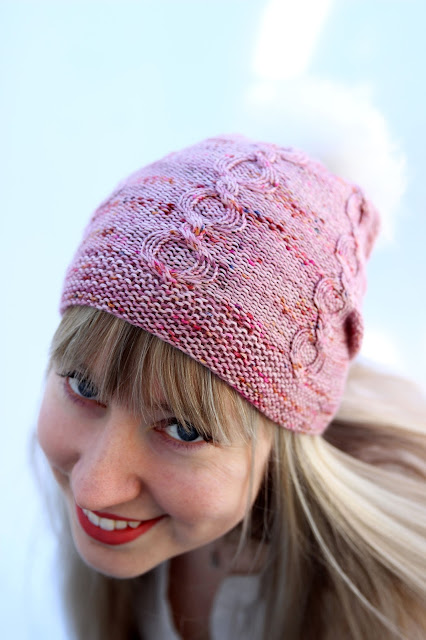 I had the feeling the yarn would work nicely as a cabled beanie. I was in the mood to design a hat with a garter stitch edge and the cables are just enough to keep the knitting interesting while letting the pretty yarn shine. 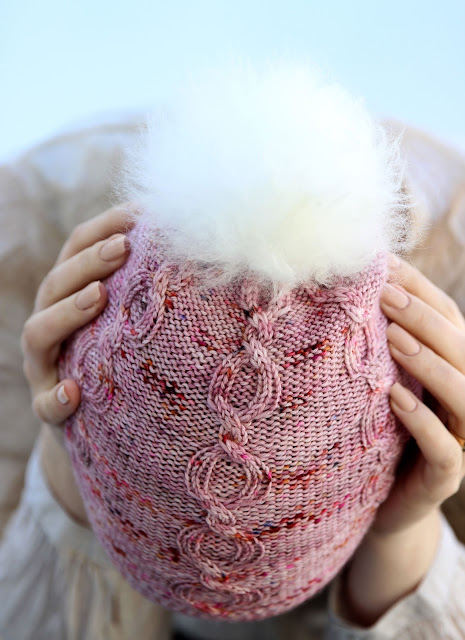 The decreases are worked between the cables and create a beautiful crown - which I of course covered with the pompom. Luckily, you can see pics without a pompom by my test knitters on Ravelry. 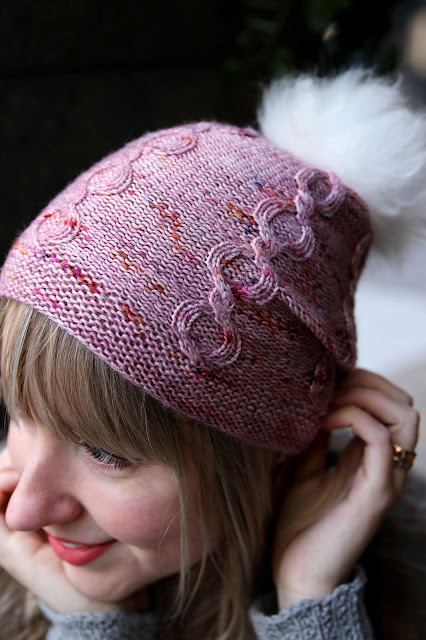 I haven't really hopped on the whole fake fur bandwagon. But then, I found these amazing alpaca pompoms at Toft booth at Edinburgh Yarn Fest. All the pompoms were a bit different and you could select one for your liking. I went with this smallish (compared to the others!) white pompom. 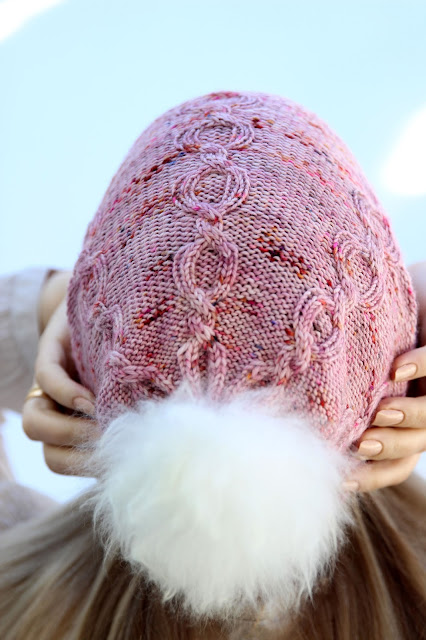 We took photos of the hat during Easter and now I can't shake the association that this is the Easter bunny's fluffy tail.

You can find the pattern on Ravelry. It has two sizes. And, you can get it -25% with the code PoMPoM until the end of the week.
Posted by Neulisti at 2:09 PM No comments:

I've been admiring everyone's box-o-socks KAL boxes on blogs and instagram for a few years already. Those boxes full of neat and sweet socks look so cute. Now, I finally decided to join in the fun. 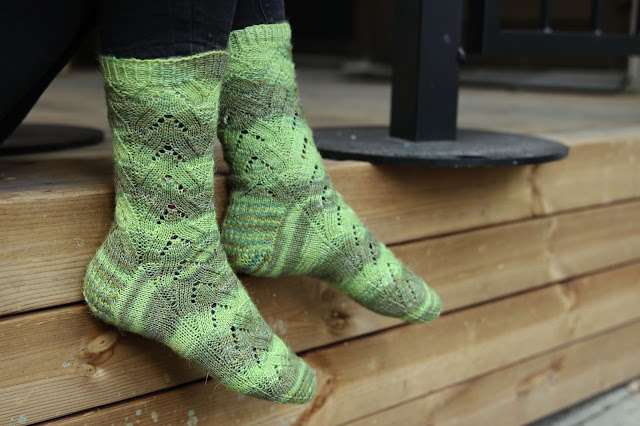 So, I made another pair of Monkeys. Even though, I wasn't meaning to, not at all. But let's start at the beginning. 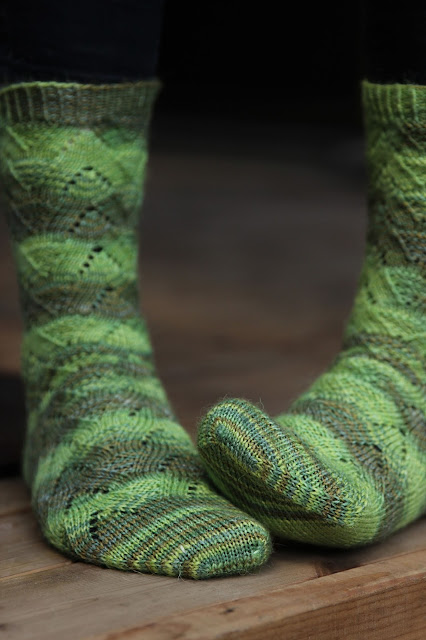 It all started with the idea to knit a box of socks this year. I got extra motivation from the thought that I could knit all those sock designs that I've had in my queue for years. You know, the ones that are really cool and I've been meaning to knit but somehow never got around to actually doing it. I also paired them up with yarns. Yep, those skeins from my stash that are really nice, yet they never seem to end up on my needles. Two birds, one needle, or how does the saying go? 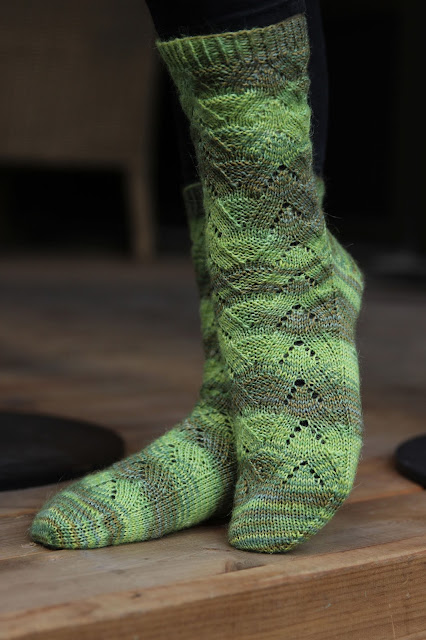 First, I dug up a historical treasure from my stash. Years ago, there was this blogger in Finland that dyed yarn and sold it on her blog, Zelda. Her yarns were my first handdyed skeins. And once, I won a competition and she promised to dye something especially for me in the colors I wanted. I asked for a mix of spring greens and got this lovely yarn. Except that I never had the heart to use it. You know, 'cause then it's gone. But now, I finally wound it up and cast on for a pair of socks.

I didn't start with Monkeys. Several years back, I bought Rachel Coopey's e-book When Vampires Knit Socks because it had plenty of pretty socks I was going to knit. Except that I've only worked one pair from the book. Do you see a pattern here? But hey, now I finally would! 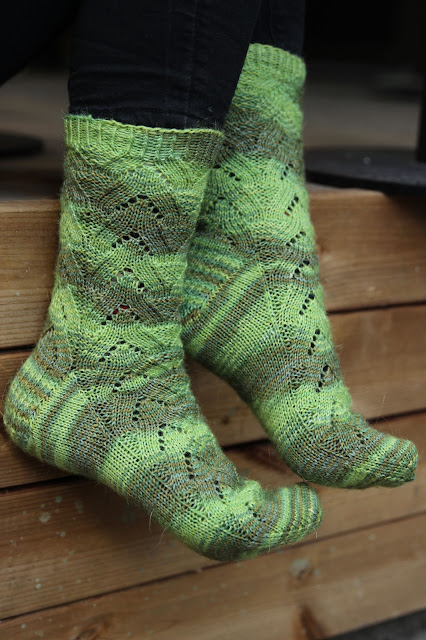 Right from the beginning, everything went haywire. The model I chose had plenty of cables and the designer used quite a lot of stitches to make sure they wouldn't be too thight. My gauge was off and I don't know if I could've saved it even using 1.5 mm needles. The socks also had a chart that I just couldn't memorize to save my life. It took me a couple of weeks to get the first sock close to the heel flap and when I finally tried the sock on it was huge. It could've accomodated both of my legs and even the hight was so off that they would've been knee-highs. At that point, I remember this hobby is supposed to be enjoyable and ripped it all off. 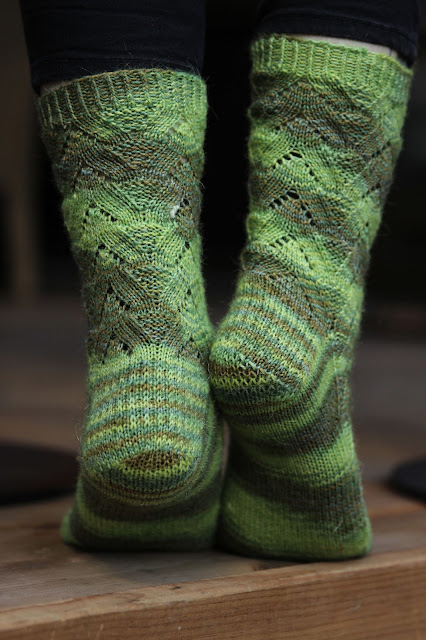 And so I swapped the unlucky pattern for one I've liked before and everything clicked into place. It only took me a couple of days to finish both socks and they were a breeze. I loved every stitch. 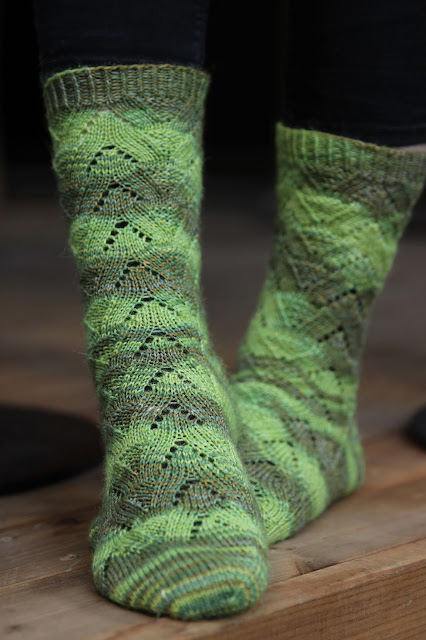 So, I didn't exactly get to knit a new pattern as I was planning. But sometimes it's not about the pattern but about the yarn. I finally knitted this treasure from my stash. The yarn had a mind of its own and made these funky spirals. You can see from the toes and the heel flap how the colors behaved in the first sock attempt. Such a difference! 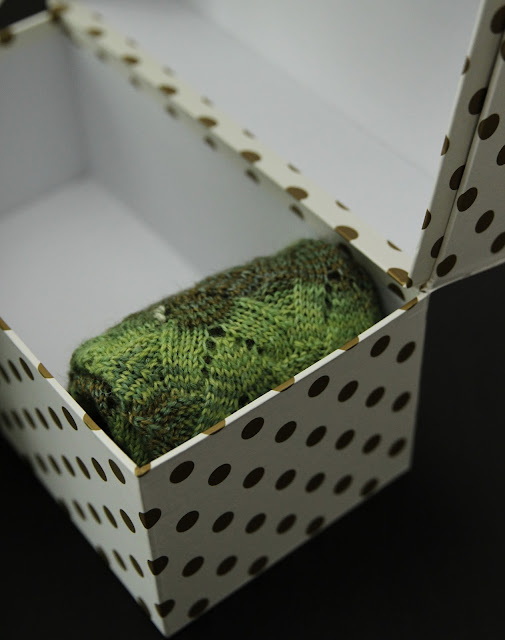 There it is, the first pair in the box of socks. We'll see who's the lucky one getting this box at the end of the year.

Posted by Neulisti at 5:34 PM No comments:

Let's take it easy this year, they said. Let's not play secret Santa but just have a KAL at our Christmas party. It's much more relaxed that way, they said. It'll be loads of fun, they said. OK, if I'm being totally honest, I was one of the people saying these things. But no matter who said it, we were all wrong. 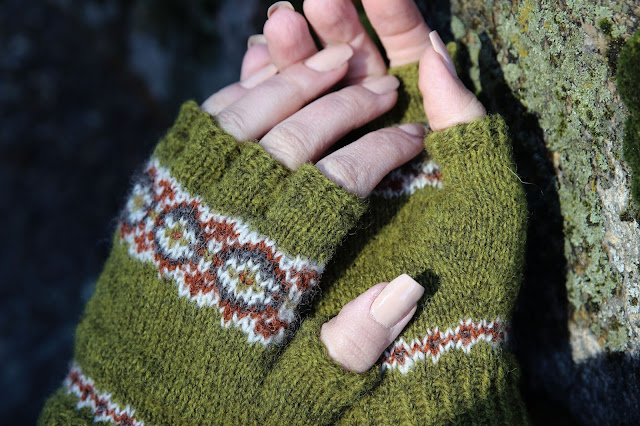 We have had a tradition with my knitterly friends to have a Christmas party and play secret Santa. We've randomly assigned pairs in the summer but still each year we've always left the actual knitting to the last moment - and some years we've even had half done socks in the gift bags. So, it has been a bit stresful from time to time and this year we wanted to take it easy. Or so we thought. 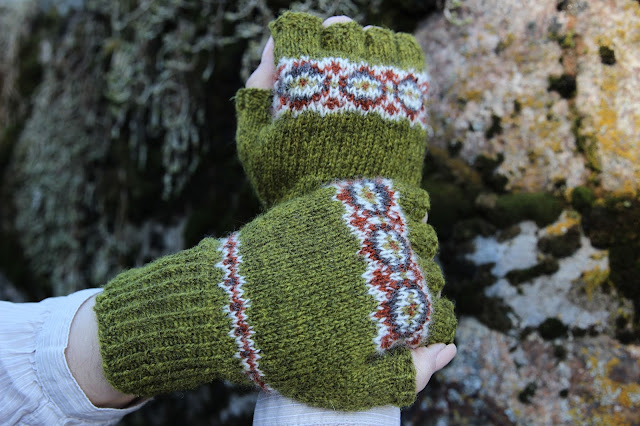 Instead of playing secret Santa, we decided to start a Knit-A-Long at the party. We've done it before and it's been fun.. sort of.

We came across the perfect pattern. The description even said it was designed to be knitted with friends swapping leftover yarns. So, we chose this pattern and everyone promised to bring some scrap yarns with them to the party. I know, it sounds fun so far. 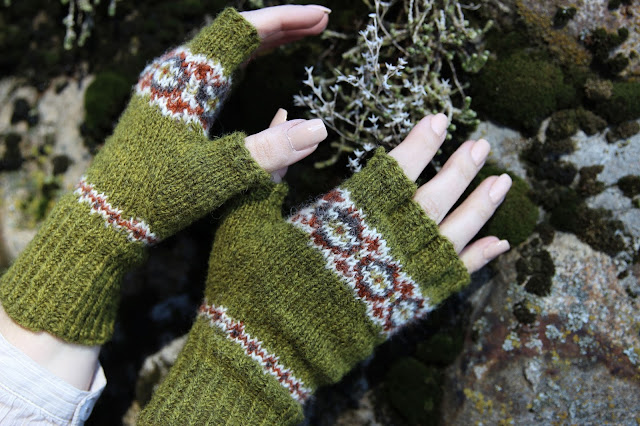 Straight away it turned out we all wanted to use Tukuwool and everyone brought a pile of Tukuwool leftovers. It's really no wonder as our last KAL mitts turned out so nice from Tukuwool but it kind of killed to idea of swapping yarns. 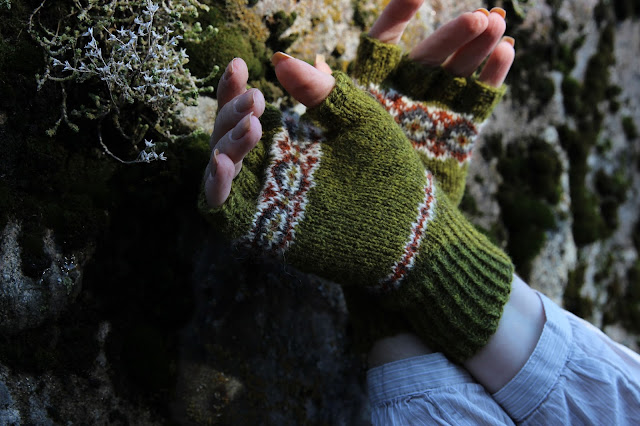 Then, we started going through the pattern and it all fell apart. A) The design had no thumb gusset in it! B) Instead of a thumb gusset, there was some stranded knitting placed at the height of the missing thumb gusset. C) And not just any stranded knitting but stranded knitting with three colors which is hard to work such that it doesn't become too tight. D) The pattern had two sizes and two charts, of which only one worked with both sizes. For the other, you needed to adjust your stitch count before starting the chart. E) This is no fault of the pattern but we tend to be lovers of symmetry and couldn't take the asymmetry of the other chart. F) The pattern was written for DK-weight yarn but the stitch counts were suited for fingering weight. So. Things didn't exactly work out as planned.

In the end, we all modified the pattern and ended up with different looking fingerless mitts. The only thing we all used from the pattern was the height of the cuff. A total mystery why we felt the need to do so. 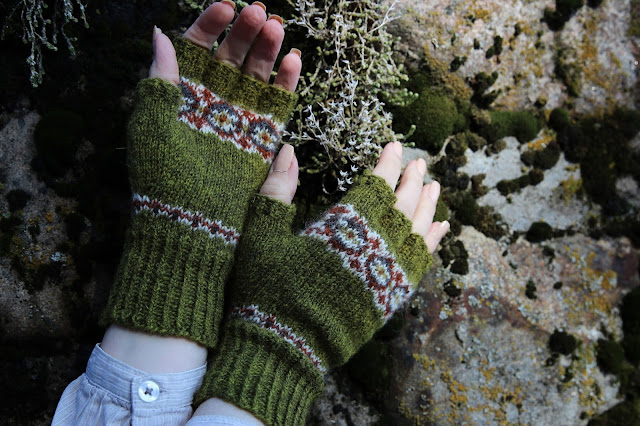 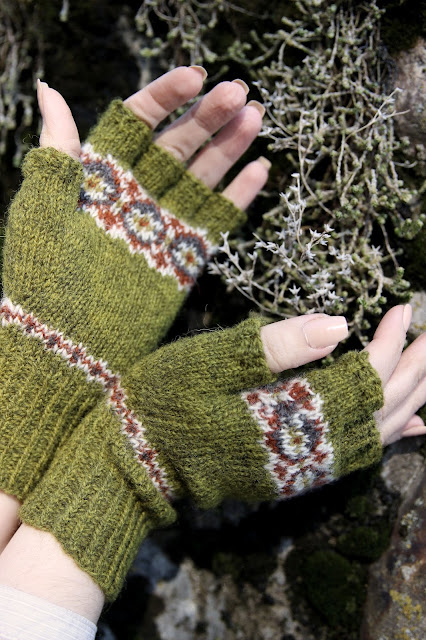 Usually this amount of modifying makes me easily leave a project for time out for about a year. However, this time I finished the mitts in few days - but ended up waiting several months to weave in the ends. Oh well.
Posted by Neulisti at 12:31 PM 2 comments: