Few years ago I knitted the best sweater ever. Except that it had a ton of little things I felt could be tweeked to make it even better. It wasn't perfect but it was the best sweater in the world. 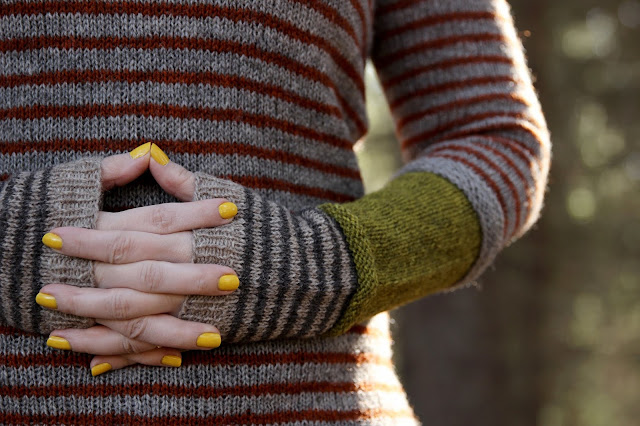 Every once in a while my brain needs to take a holiday and work on someone else's pattern. You know, knit without thinking. Except that if you know me, you know that's never really the case. 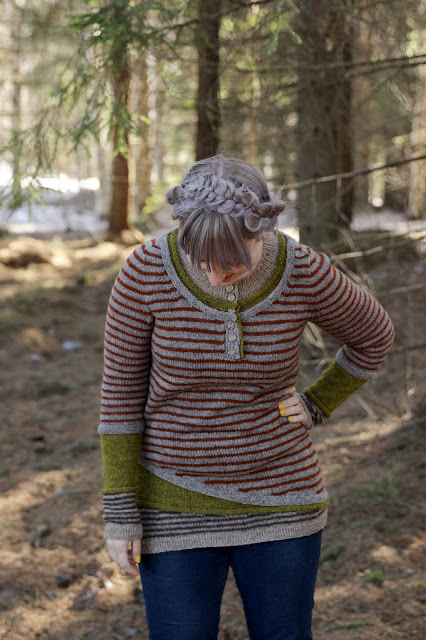 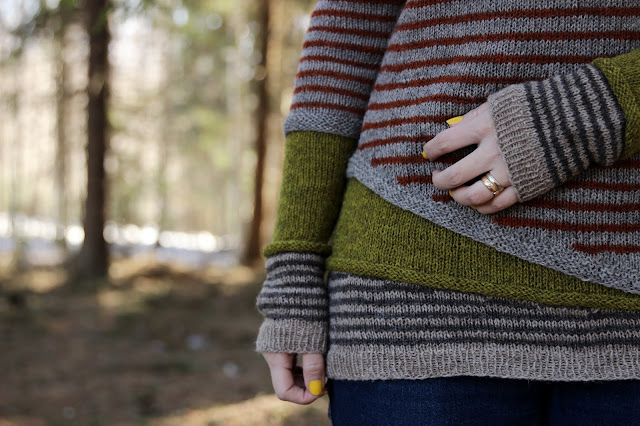 If you're not familiar with the pattern you should know the measurements are a bit off. The first time I made this I started working on size M - even though my measuments are closer to L. And both me and Hubby could fit in that sweater. So, I unraveled that and worked the sweater in size XS! In the end it fitted me nicely except that the sleeves could've been a bit looser. So this time around I cast on for size S. Though, I didn't stop to consider that Tukuwool is a more airy and fluffy than my yarns last time and now the sweater is a bit too loose. The sleeves are still a bit thight. 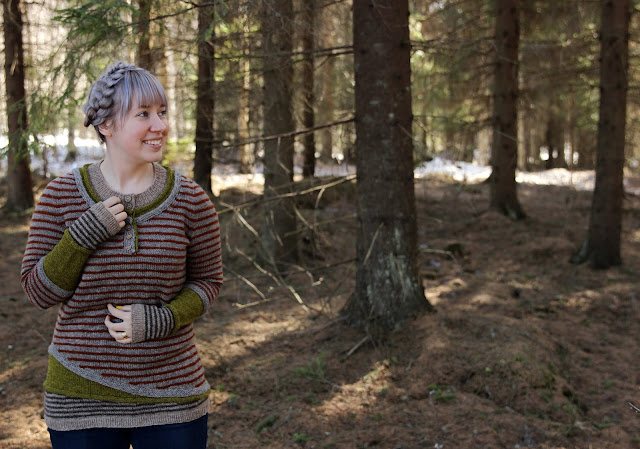 The sweater is worked bottom-up. First, you make the stripy hem. That's shaped with short rows which can be a bit of a pain with striping as you constantly have to remember to carry along the other color to have it in the right spot. Then, you cast on for the middle sweater. That one has a stockinette stitch hem that's meant to roll and the first two sweaters are worked together before continuing with the solid color middle sweater. Finally, you'll cast on for a third sweater, join it with the middle sweater and again, shape with short rows while working stripes. 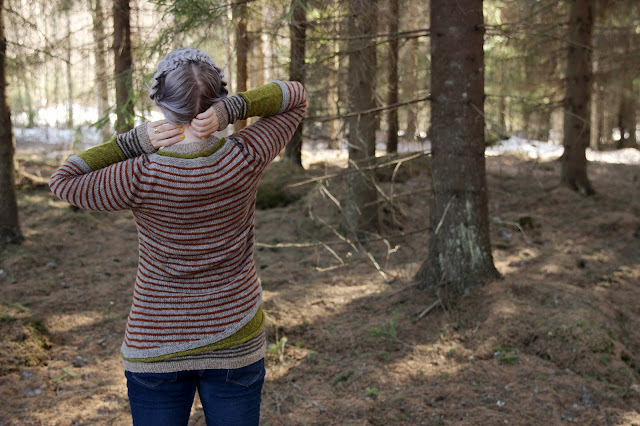 In the original pattern, both the middle and main sweater have a stockinette stitch edging but I modified the main sweater to begin with few rows of garter stitch to make it different from the first two. I also modified the stripes to be 4-2 stripes instead of 2-2 - again to differentiate it from the first sweater. This made working short rows even more irritating but modifying things to be harder seems to be my thing. 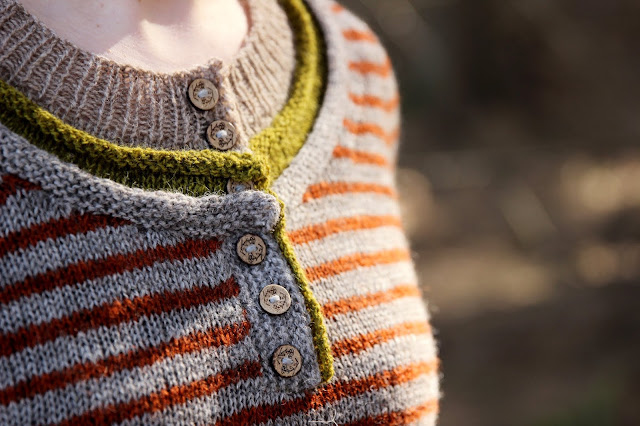 Once I finished the short rows I wanted to throw the sweater in the bin. Never ever before have I had any trouble combining any Tukuwool colors together but for some reason this time the greenish yellow Uupo made the sweater look dirty. I cooled off for a couple of weeks and then ripped out Uupo and replaced it with this lovely orange Repo. Much better! 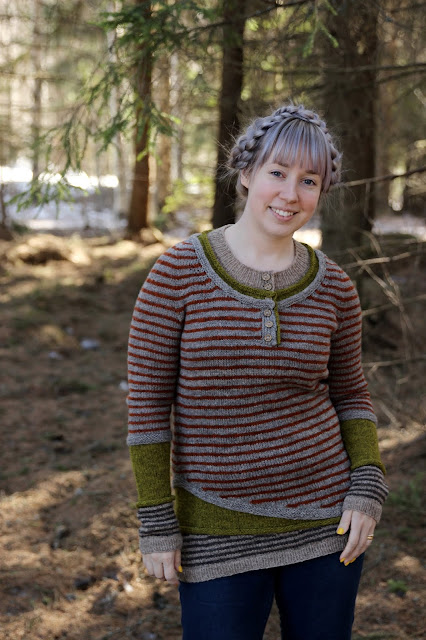 Once I got past the short row shaping (again) the sweater was coming along really fast. A bit too fast even. At this point I started to notice that my gauge was off since the sweater was looking way too tall. I didn't want to rip it back but I did have to modify the sleeve caps to make them fit with my gauge. More mods in the horizon. So much for that mindless knitting. 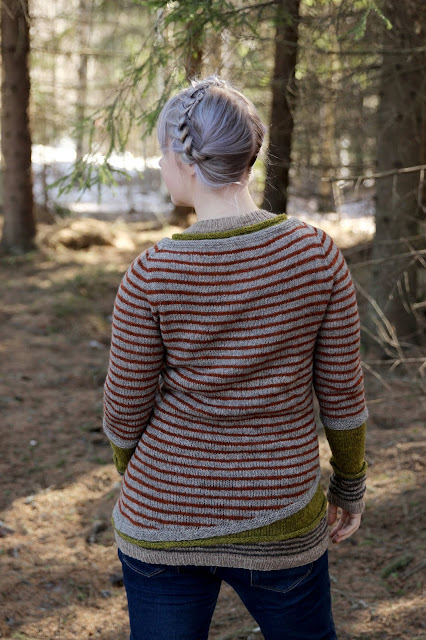 The sleeves I worked as instructed - until it was time to join them with the body. 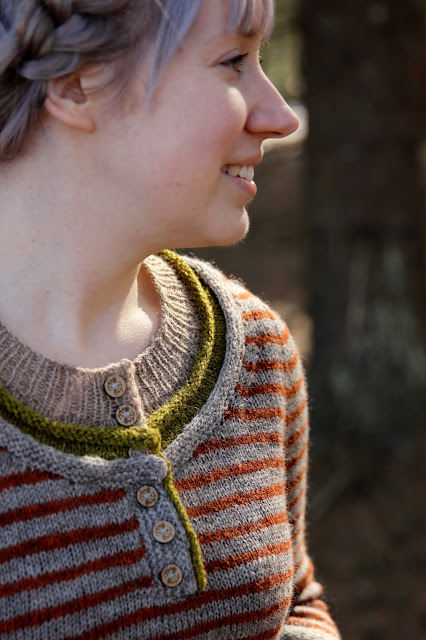 If you take a look at my first 3 in 1 you'll notice that the neckline looks a bit different. In the pattern, there's just few purl rows before changing from one color to the next. It bothered me last time that the sweaters really look like layering pieces at the hem but not as much at the top - and it would be easy to modify. Of course that meant a lot more bind off - pick up and knit. But it was totally worth the trouble. It looks awesome and truly like three different sweaters. 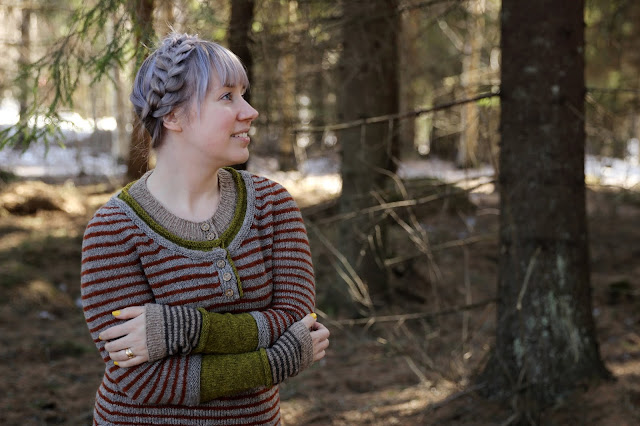 The last challenge was the main color Auri. As my gauge was off I run out of it. First I replaced it with another Finnish yarn which happened to be exactly the same color (they're both spun at the same mill too!). But I lost at yarn chicken with that one as well. Finally, I had to work the last few rows with Auri in Tukuwool Sock. It's thicker yarn but you don't really notice as it was just last few rows. And I'm super happy I got to use up old scrap yarns.

It turned out not be easy, relaxed and mindless knitting. Not even close. Though, I should have known as that's what always happens when I decide to go for easy knitting. But I really, really love the sweater. It was well worth all the trouble and it looks so good.
Posted by Neulisti at 5:48 PM No comments:

Let there be glitter

Last fall I was visiting the Finnish craft fair at Tampere and was really happy to find a new Finnish indie dyer's yarns at the booth of yarn shop ILO. I was even happier when the dyer contacted me and asked if I'd like to try out her yarns to write a review. Of course I would! 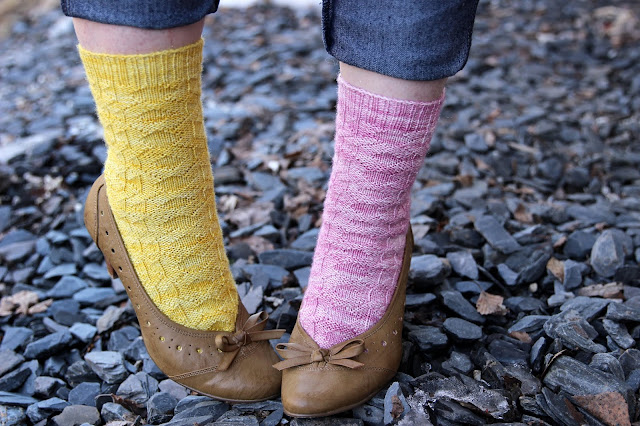 We agreed that Anki would send me some yarn and I'd write a review. Oh, what a happy surprise it was that she sent me not one but three skeins of her Glitter Sock. 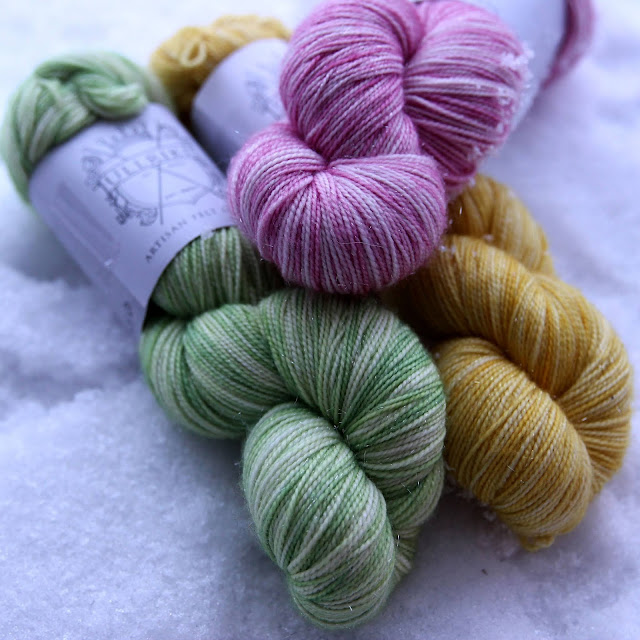 I was a bit busy then so I figured I would work on someone else's sock pattern. I chose this design because I meant to try it out already for one Christmas present but then found out it didn't come in the right size. But this time I cast on with this deliciously semi-solid pink yarn. 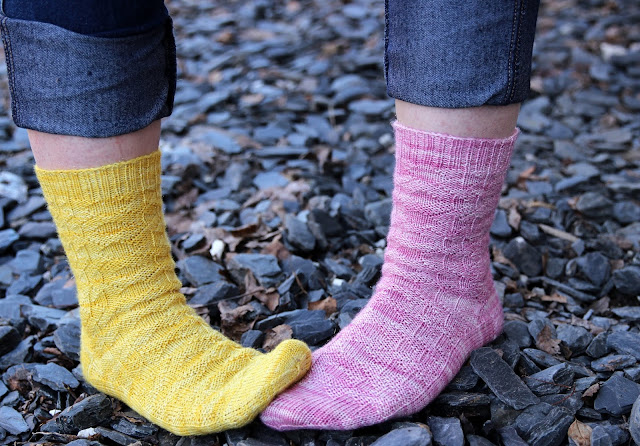 Let's start off with the yarn review. Oh boy, it was a treat! I really like these semi-solid colors. They're lively with lighter and darker bits but not too lively to show off different kinds of stitch patterns. And the yarn base is one of my favorites. I love the high twist merino base but here I especially love that the glittery stellina fiber is so soft. The bling comes in beatiful thin little fibres to spice up the yarn and there's plenty of bling - not that I'll ever manage to capture that in a photo. Some glitter yarns have rather coarse and hard bling fibres that can really hurt your hands but this was really gentle and soft. My official yarn review is 5/5 glittery stars. 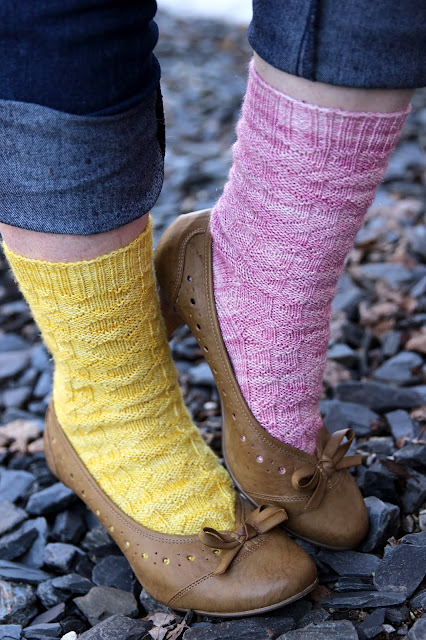 If I really loved the yarn, I had big problems with the socks. This pattern is worked cuff-down. It has a beautiful texture worked with knits and purls. It looks really nice but for the life of me I couldn't memorize the chart. I like charts that are easy to memorize or where I can easily follow the logic of the pattern even without checking the chart. 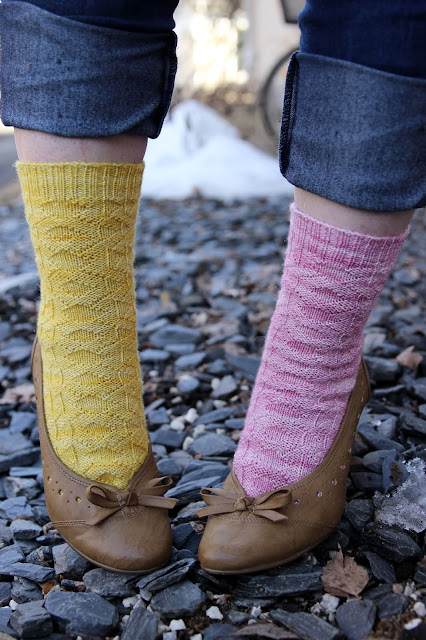 I never learned to follow the logic of this pattern. I couldn't memorize it and had to check every single row from the chart. So I made half a sock and left the project hibernating. 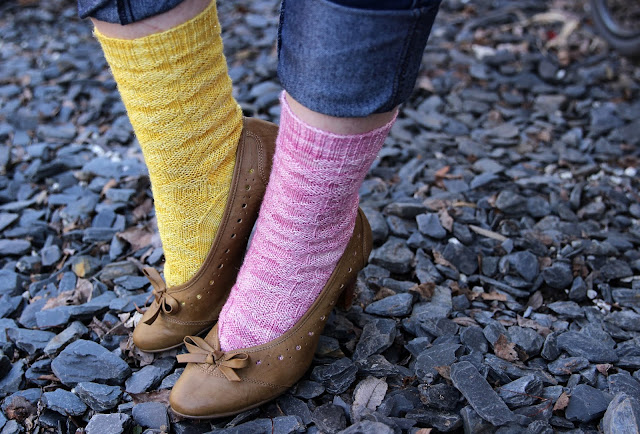 Then come Monday this week, I finally dug this project up and decided it was high time to finish the socks and write the review. And magically, working the stitch pattern came quite naturally. I still couldn't memorize it more than few rows at a time but that already helped a lot and I started enjoying the project. The first sock was finished in a matter of hours. 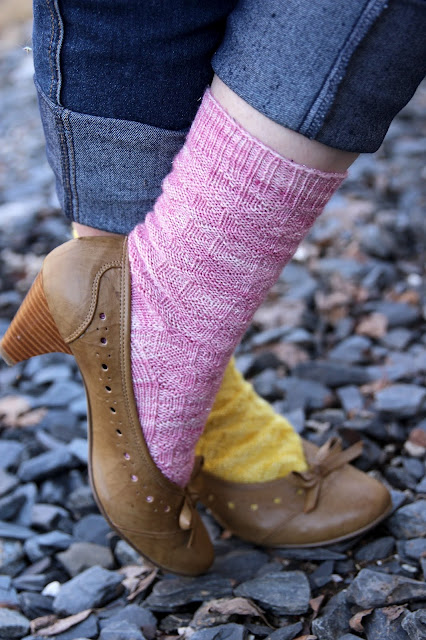 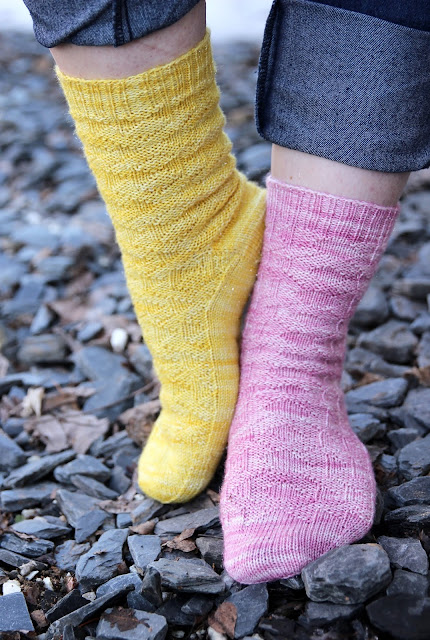 In the end I finished the socks in just a few days - and they're beautiful! I you don't like starting at a chart, these might be a challenge but I love the end result and the yarn. I can truly recommend it.

I also happen to have a sock design idea brewing in my brain so I might end up casting on with the third skein as well.
Posted by Neulisti at 7:35 PM No comments: