Some things take their time. This is a sweater I designed several years ago. I just never had the time to actually knit it - until now. 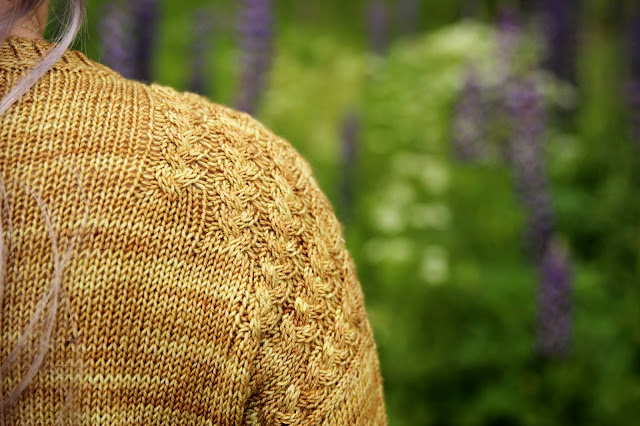 I love to wear chic boxy sweaters and they are usually at their best when they're mostly plain vanilla stockinette stitch. The trouble is that plain old stockinette doesn't keep me interested long enough. So couple years ago, I thought I might have the stamina for a boxy stockinette sweater if there were cables on it to help me measure my progress. 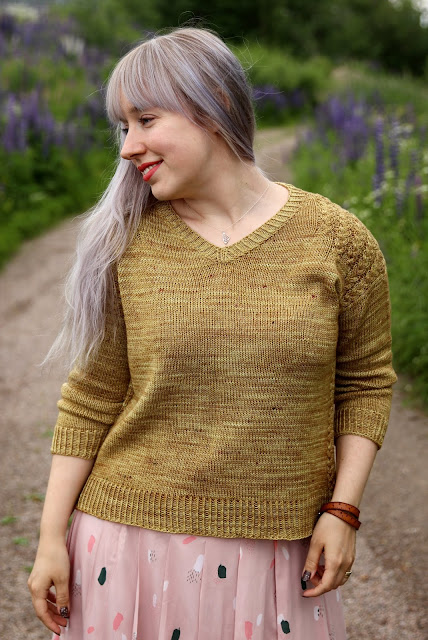 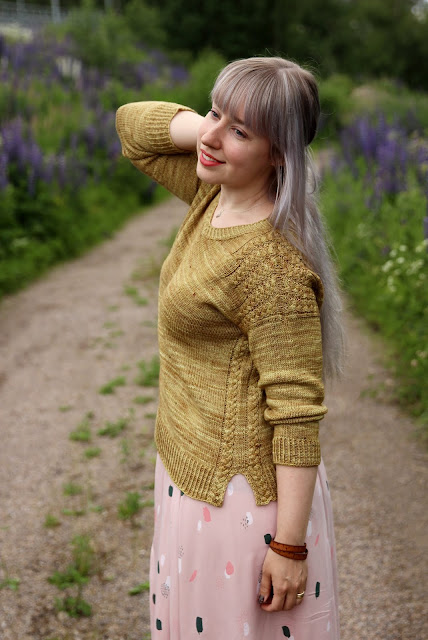 Besides boxy sweaters, I'm a fan of all things asymmetric. When I was younger, I used to knit mismatch socks with the colors reversed on the other sock. I'm the one you should be looking at if something is not straight. So I came up with this idea of a boxy sweater with asymmetric cables on each shoulder - back, front, left and right! 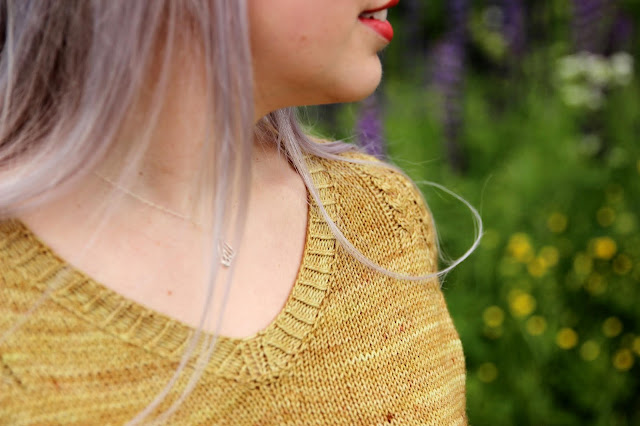 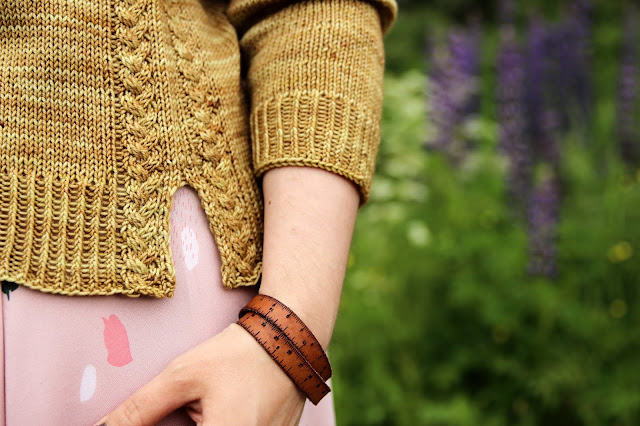 Dripping Honey is a top-down seamless boxy sweater with braided cables dripping down from the shoulders. One of the cables continues all the way to the split hem. The sweater features a v-neck and 3/4 sleeves. 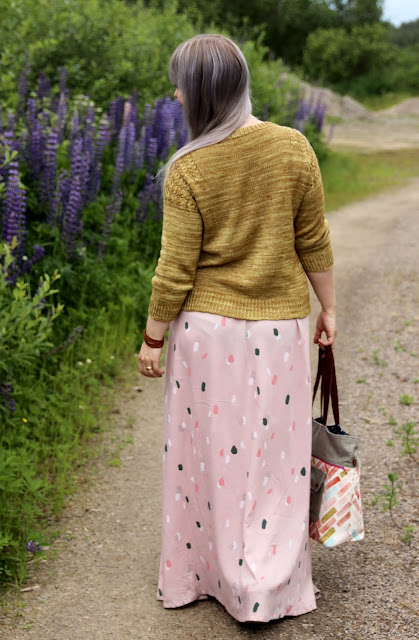 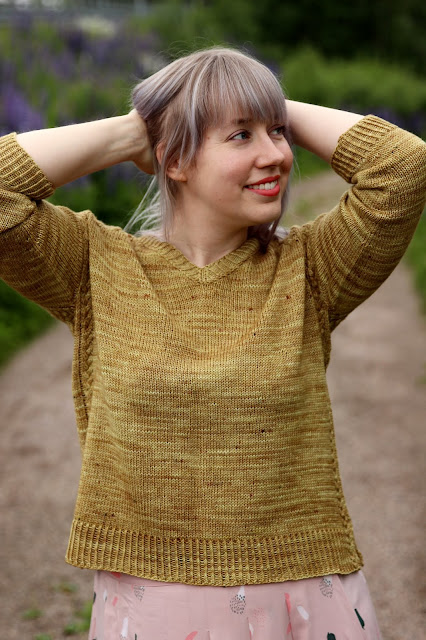 You'll need a bit of concentration at the beginning with the shoulder shaping, starting the cables and increasing at the neckline. But once that is done, most of the sweater is relaxing stockinette stitch with just a few cables at the sides to keep you interested. 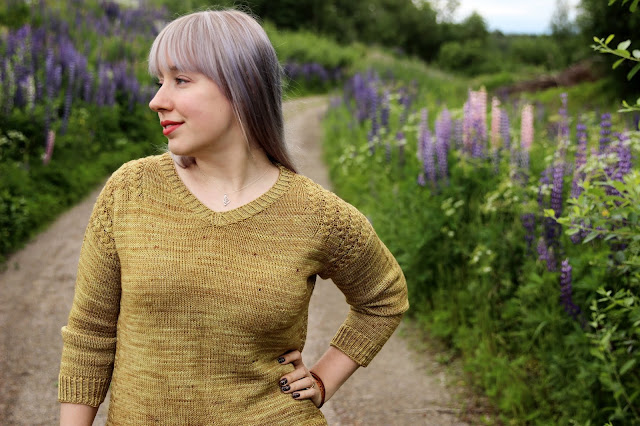 The name of the pattern got its inpsiration from the yarn. Few years back, I had the honor of my Utu cardigan being featured on the cover of Laine magazine and Valentina from SnailYarn wanted to thank me by sending me a bit of yarn. A bit is what I thought but the mail man came with a box filled with more than just one sweater quantity! One of those treasures was this wonderfully plumpy Merino Sport in the colorway Honey - hence the name of the design. 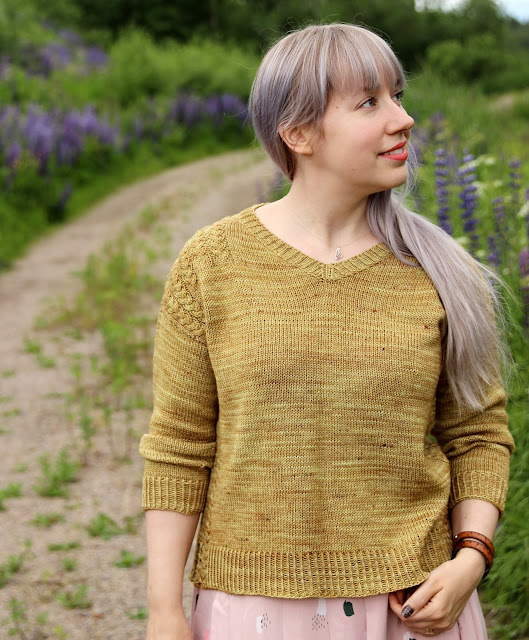 SnailYarn is having a shop update today to help you get your sweater quantities. There's a new sport weight non-superwash yarn in gorgeous colors - one of them Honey, of course. 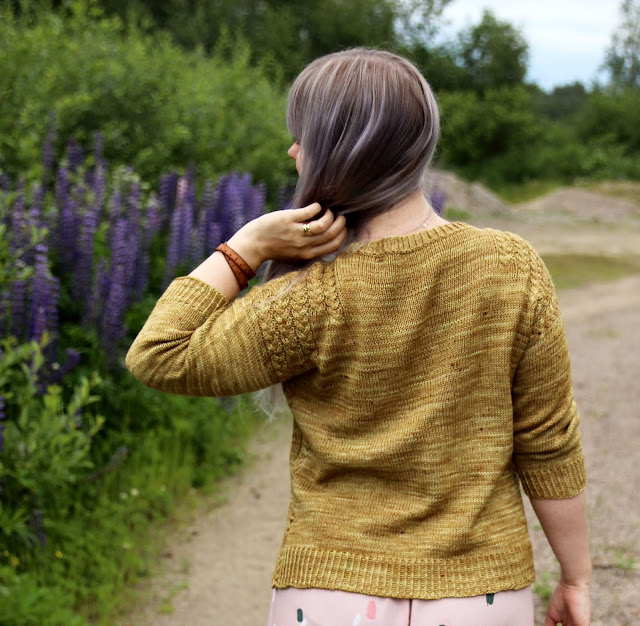 You can find the pattern on Ravelry and until Sunday September 8th, you can get 25% discount using the code HUNAJA (honey in Finnish).

Stash as old as time 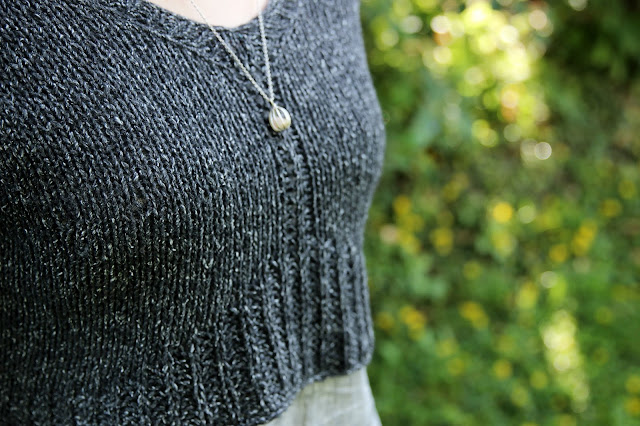 Years ago, back when I was still in highschool, I didn't even know that there were actual yarn stores. I was an enthusiastic knitter but got my yarn from the market while we were shopping for food, and I had now idea there were other yarns available. Not that there's something wrong with market yarn but I was unaware of anything else. Back then, there were no smart phones with all the knowledge of the world at your finger tips in a matter of seconds. I didn't think to google yarn shops as I didn't know they existed. And I had no idea you could order yarn online. 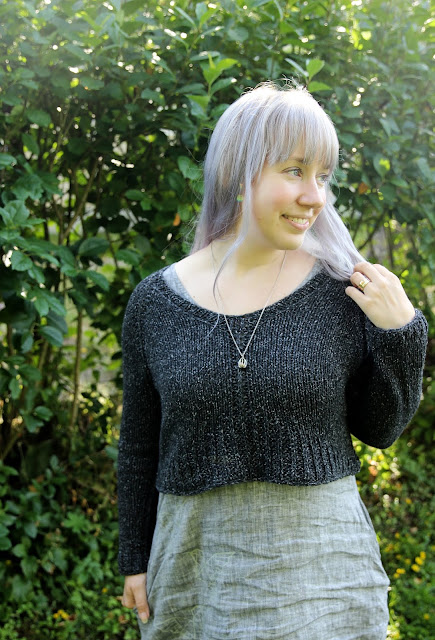 I don't remember how I found out about this little shop in Helsinki but Menita opened my mind, not to mention my wallet. During one of my shopping trips there, I bought a sweater quantity of soft and tweedy Rowan Silky Tweed - a yarn that's now discontinued. 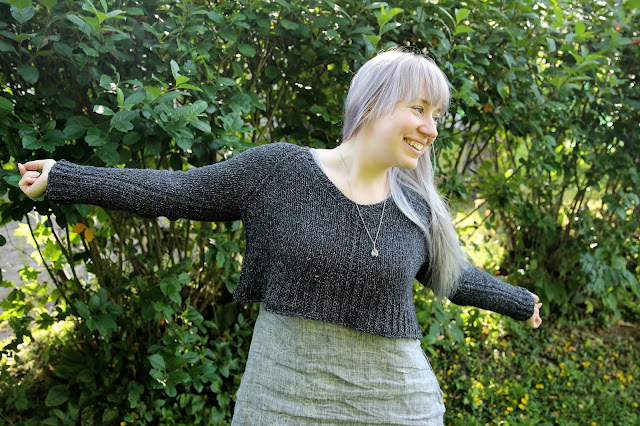 I let my treasures marinate in the stash for a couple years until I read an interview of a knitting artesan. The piece showcased the artist herself but also some of her knitted pieces of art. One of them caught my attention and I had to make one for me. And I had to come up with the pattern too because it was just an interview. 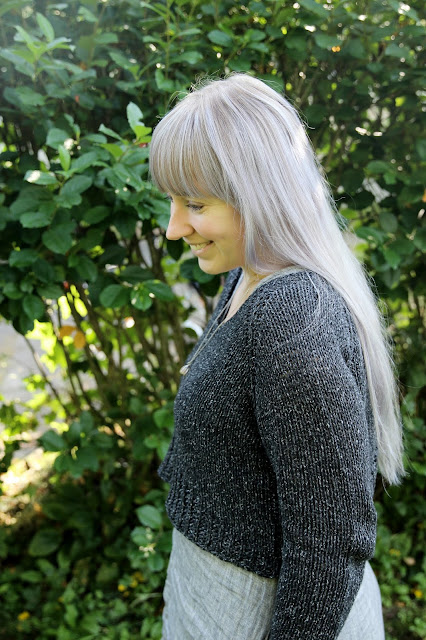 So I cast on for chunky, woolly corset! Yes, I'm afraid you read right. I dreamed of a chunky corset with big cables and several layers of peplum hem. I had just found English knitting patterns courtesy of Kim Hargreaves and had just learned to shape peplums with short rows so I was eager to use my newly found skills. I bet you're not very surprised to find out the corset was a bust. Luckily! What in the world would I have done with a woolly corset?

After several failed attempts, I lost my cool and threw the needles in the corner. I was so bummed over the time I had waisted and the fact that I couldn't realize my cool idea that I didn't want to even touch the yarn. Hubby was chivalrous and offered to unravel and re-cake the yarn. And ever since then, the yarn has been sitting in the stash. And did I mention this was over a decade ago? 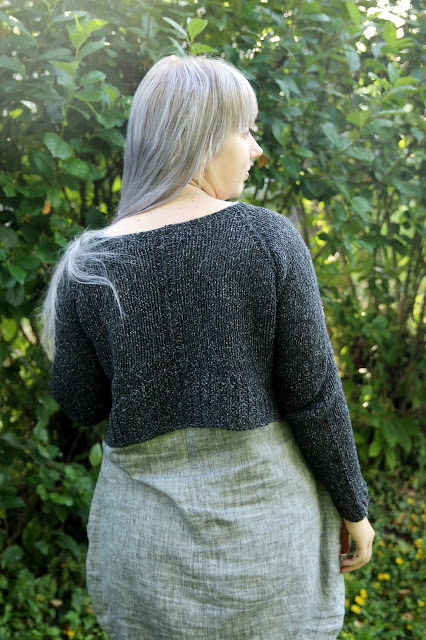 Then one night last week, it happened that I had only one wip on my needles. Working the lace edge of a huge circular shawl takes so much concentration that I can only muster a little piece at a time. So I was in need of a simpler knit. I remembered I had been eyeing the Ursa sweater over on Instagram. I did a bit of digging only to find that I had already placed the pattern on my Ravelry queue and even paired it with stash yarn! I bet you can guess which yarn. 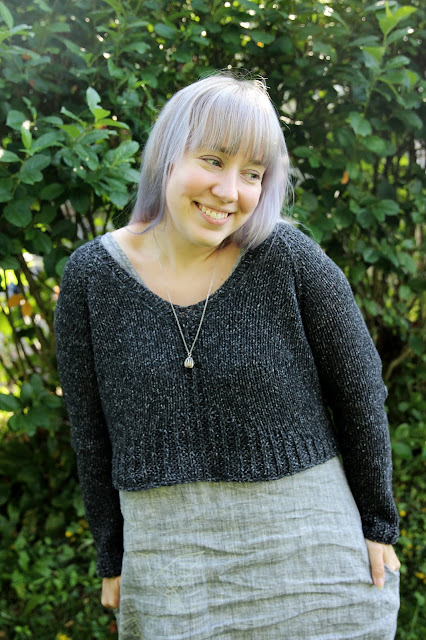 I almost can't believe that the decade-old, once unraveled yarn actually found its way back onto my needles. And not only that but it turned into a really nice sweater that will get lots of use. I hadn't held onto the yarn for nothing. The yarn was a bit too thin for this pattern but a few extra increases took care of that easily. 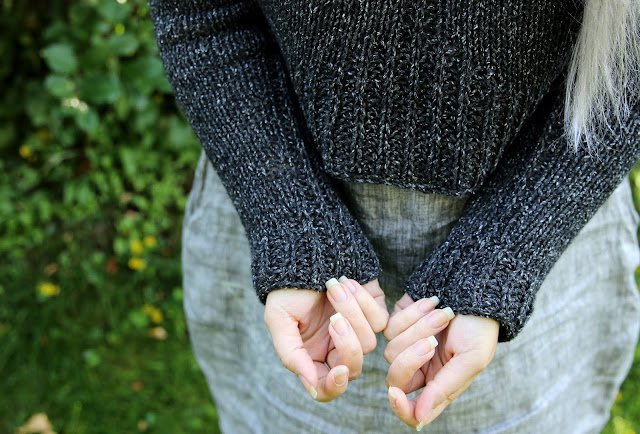 Ursa is a really simple sweater. It's worked top-down and it has v-neck and raglan sleeves. The interesting part is that the raglan seams are worked in half-brioche. That means working brioche only on the knit stitches and working the purls normally. The sweater also features half-brioche stripes at the center of the front and back. At the hem those stripes slowly grow into these triangles that will meet at the sides. I liked the triangles a lot so I made them on the cuffs as well. Not that anyone would notice but I will know they're there and they're pretty. on erittäin yksinkertainen pusero. Se neulotaan ylhäältä alas ja siinä on v-pääntie ja raglanhihat. 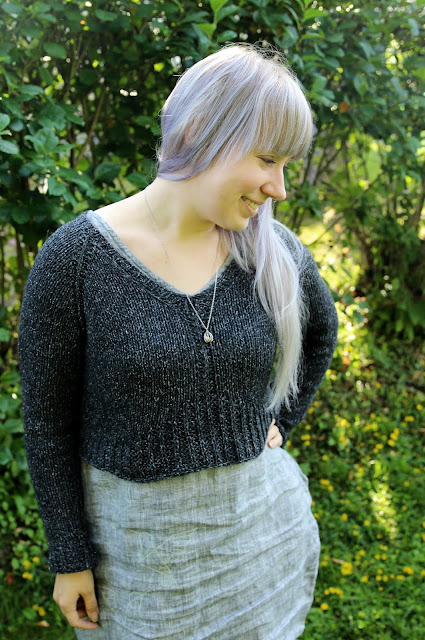 I haven't worn such a short cropped sweater since the days when I bought the yarn. I guess I could give into the fashion cycles this much.
Posted by Neulisti at 11:38 AM 1 comment: