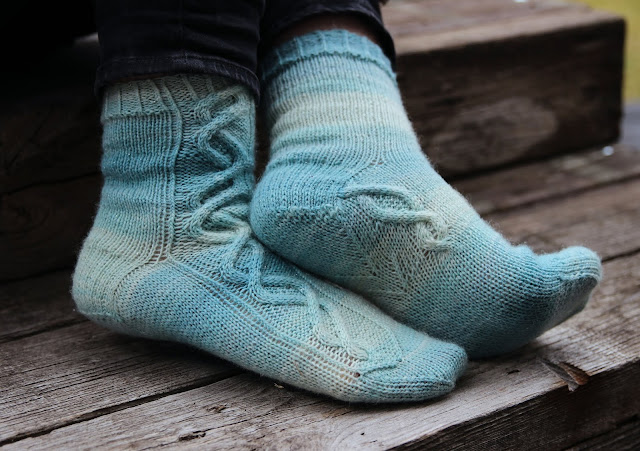 I wasn't planning on designin socks but one beautiful spring morning my friends and I headed out on a joyride. And since you're supposed to do something silly/crazy on a road trip, someone had the idea that we should all buy a skein of this disco yarn. We all chose different colors and promised to knit socks. 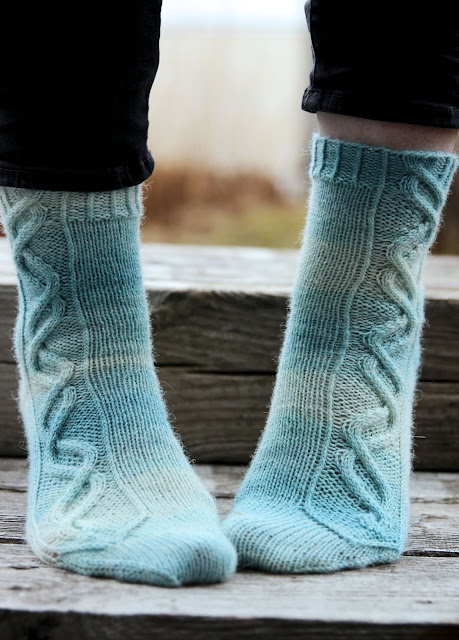 I could've just taken the easy way out and knit a pair of plain stockinette stitch socks or followed a pattern. But alas, I decided that if I have to knit a pair of socks, I could just as well design a pattern. 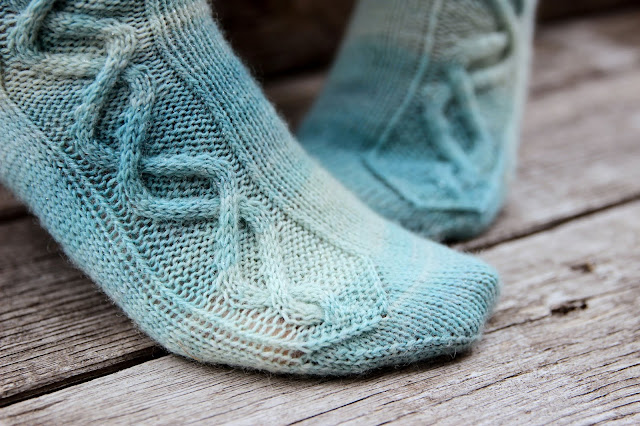 I knew I wanted the socks to be mostly stockinette and that there should be a cable panel on one side. But typically for me, that was just the beginning. Soon, I came up with the idea to use a similar cable on the gusset which meant I had to move the gusset decreases to the center of the sole. The decreases form these cute little triangles on the sole. 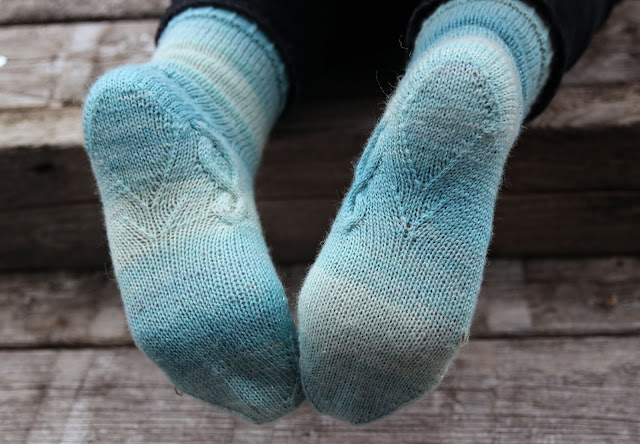 Even though the disco yarn was kind of cute it wasn't a nice yarn to knit. The bling fibre was coarse and the wool was ichy as well. I even managed to get a blister to my finger. No thank you. 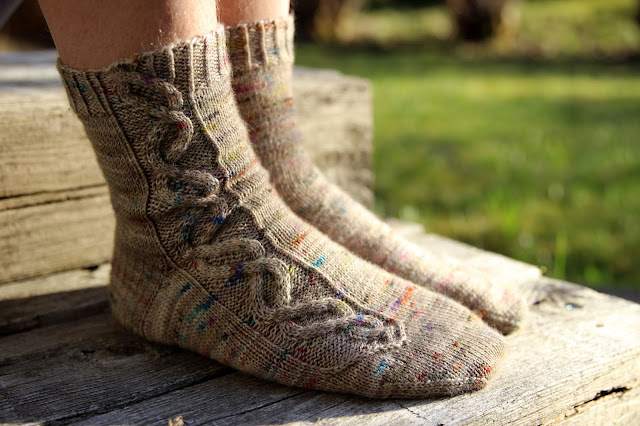 Since it's nice to provide more than one size for a sock pattern I decided to make a pair for dear hubby too. Kinda.. if I'm totally honest, I decided to make myself another pair. But soon my better half brought up his jelousy issues raised by the box of socks that won't be for him. He also mentioned that it's been ages since his last new pair of woolly socks and that perhaps I've totally forgot about him. 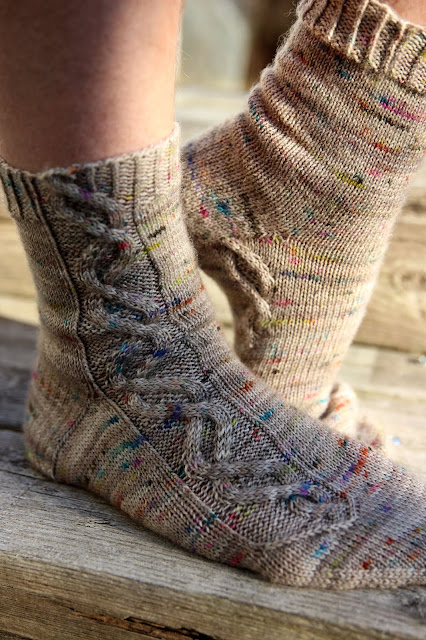 I still thought I might get to keep the socks as I showed the yarn I wanted to use for them. But years of color therapy have done their magic and the yarn was approved gladly. So, now we have matching socks - his socks being made from my stash treasure. 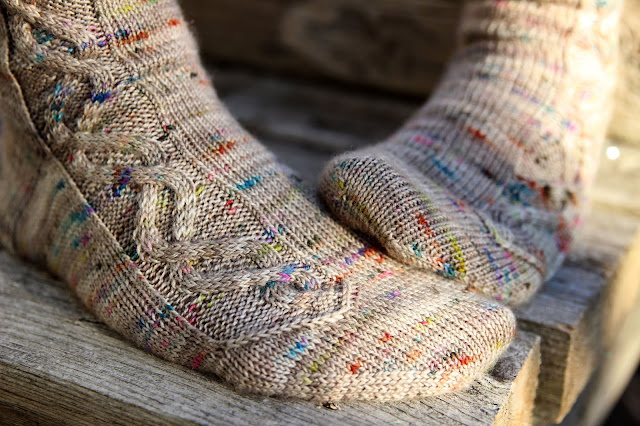 The pattern has sizes S, M and L. They're for 60, 64 and 72 sts. I personally never look at the gauge of a sock pattern but just select the size based on the stitch count. I know I can get a nice snuggly pair with 60 sts. If there's a lot of cables or color work, 64 is fine. And 72 sts are enough for hubby. 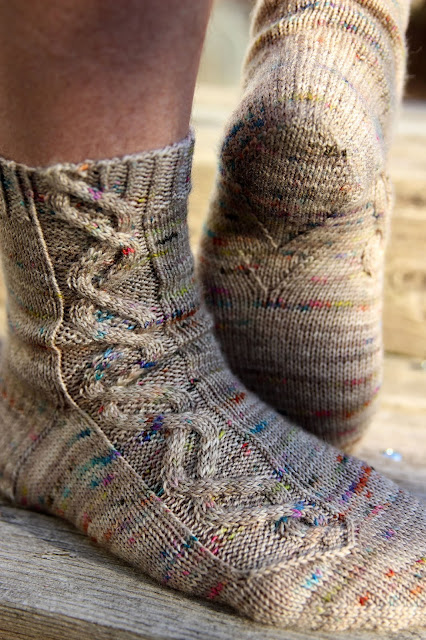 The name of the design started with the icy colot of the disco yarn. It remainded me of Frozen but then the cables started to look like ice skate tracks and I named the pattern after a famous Finnish ice skater. 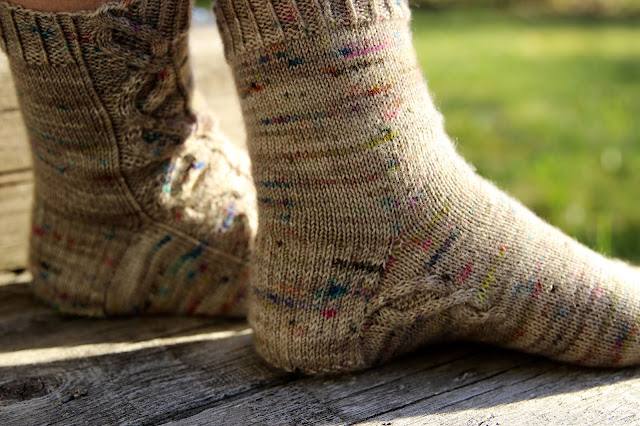 You can buy the pattern clicking the link above.
Posted by Neulisti at 8:26 PM